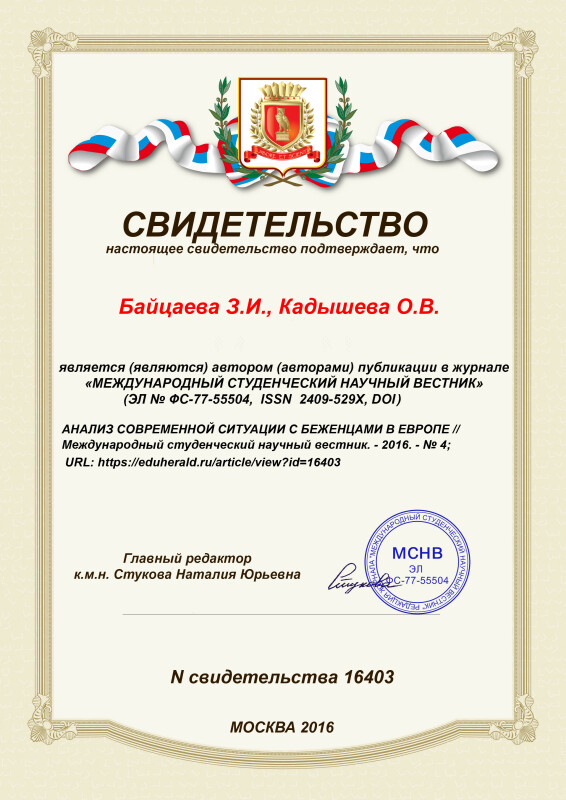 This current refugee crisis, caused by sharp increase of refugee and migration flows from the countries of Asia and Africa to Europe since the beginning of 2015, has been covered in numerous articles and publications that made it to the front pages of the world media. The crisis itself is no doubt a very complex multidimensional problem that has many aspects, including political, economic, social, diplomatic, as well as ethical and philosophical. Disputes go not only about such questions as where and how to accommodate the arriving people, but also about whether and how to provide them with jobs and education, who has to bear responsibility for the crisis which came «unexpectedly», and, what is more important – the general principles of humanity or rational and practical reasons.

Let’s start with looking at numbers. The International Organization for Migration (IOM) Displacement Tracking Matrix (data as of 18.12.2015) reports that a total of 990,671 migrants and refugees have entered Europe in 2015 from Africa and the Middle East by a combination of irregular land and sea routes. It is virtually certain 2015’s total will surpass the one million mark, which would be nearly five times 2014’s total. In 2015 just over 800,000 migrants and refugees arrived in Greece by sea. During December alone, some 57,000 migrants arrived and approximately 45,000 (80 per cent) left by crossing the border into the Former Yugoslav Republic of Macedonia (FYROM) [6].

According to the United Nations High Commissioner for Refugees (UNHCR), the global refugee total, which a year ago was 19.5 million, had as of mid-2015 passed the 20 million threshold (20.2 million) for the first time since 1992. Asylum applications were meanwhile up 78 percent (993,600) over the same period in 2014. And the numbers of internally displaced people jumped by around 2 million to an estimated 34 million. Taking into account that the report covers only internally displaced people protected by UNHCR (the global total including people both in and outside UNHCR’s care is only available in mid-2016), 2015 is on track to see worldwide forced displacement exceeding 60 million for the first time – 1 in every 122 humans is today someone who has been forced to flee their home [12].

The picture below shows the main destination countries for refugees globally, and changes in refugee distribution over 2013–2015. The conflict in Syria continues to be by far the biggest driver of the migration. Nevertheless, the ongoing violence in Afghanistan, abuses in Eritrea, as well as poverty in Kosovo, disorder in Ukraine are also leading people to look for new lives elsewhere.

The 1951 Refugee Convention spells out that a refugee is someone who «owing to a well-founded fear of being persecuted for reasons of race, religion, nationality, membership of a particular social group or political opinion, is outside the country of his nationality, and is unable to, or owing to such fear, is unwilling to avail himself of the protection of that country.” [11]

It is very important to clearly distinguish between migrants and refugees.

Migrants, especially economic migrants, choose to move in order to improve the future prospects for themselves and their families. Most of migration, according to ILO studies, is employment-driven.

Refugees have to move if they are to save their lives or preserve their freedom. They have no protection from their own state – indeed, it is often their own government that is threatening to persecute them. If other countries do not let them in, and do not help them once they are in, then they may be condemning them to death – or to an intolerable life in the shadows, without sustenance and without rights. That is why refugees demand more careful treatment of the government than migrants do.

The 1951 Convention relating to the Status of Refugees is the key legal document in defining who is a refugee, their rights and the legal obligations of states. The 1967 Protocol removed geographical and temporal restrictions from the Convention. In July 2001, UNHCR published a special edition of its Refugees Magazine dedicated to the 50th Anniversary of the Convention.

Tensions in the EU have been rising because of the disproportionate burden faced by some countries, particularly Greece, Italy and Hungary where migrants have been arriving by boat and overland [9].

In 2014, EU countries offered asylum to 184,665 refugees. In the same year, more than 570,000 migrants applied for asylum – although applying for asylum can be a lengthy procedure so many of those given refugee status may have applied in previous years [9]. The picture below shows asylum applications approved in 2014, and total claims granted by country. Germany is currently the preferred destination for tens of thousands of migrants in central Europe. More than 800,000 people claimed asylum there in 2015, four times the figure for 2014. Germany has a quota system, which redistributes asylum seekers around its federal states based on their tax income and existing population density [9].

Last summer Germany surprised the European partners with widely opened doors for refugees. The chancellor Angela Merkel called it a moral imperative of Europeans in relation to those who flee from war. The huge sums were unblocked, the centers for reception were opened, programs of integration developed, etc. As a result, Angela Merkel even got the nickname «Mother Teresa» [4].

But, Angela Merkel’s decision to let a large number of refugees into Germany hits on her now, according to the article published in the Financial Times [10]. The chancellor Angela Merkel realized that her decision to facilitate rules of entrance for the Syrian refugees who rushed to Germany was risky. But she couldn’t expect that troubles will begin for her so soon. And, according to the polls dated the middle of October, Merkel’s rating in comparison with September fell by 9 % to 45 %. Zeekhofer’s rating increased by 11 % to 39 %.

On the other hand, many do support Merkel’s actions. A public opinion survey held in November showed that on a question «Do you think that somebody could have coped with the present problems better than Angela Merkel?» 60 % answered negatively. Only 20 % believe that another politician would have found better solutions to current challenges. In addition, journalists of “Agence France Press” called Angela Merkel the most powerful person in the world in 2015. Such a decision is explained by her policy concerning refugees and her position on debt crisis in Greece. [2]

Vast numbers of migrants have made their way across the Mediterranean to Europe in 2015, sparking a crisis as countries struggle to cope with the influx, and creating division in the EU over how best to deal with refugees. And because human migration is a transnational phenomenon, no country can resolve the crisis on its own [1]. Yes, there are immediate measures that are necessary in order to help those refugees that have arrived (resettling people, providing food, shelter, medical services, housing, etc), and medium-run measures, aimed at improving the efficiency of immigration policy (integration and adaptation programs, education and training for refugees and their children, etc.). But, most important is to eliminate the root cause and to make peace in the lands that refugees come from, to ensure people’s security and well-being in their home countries.