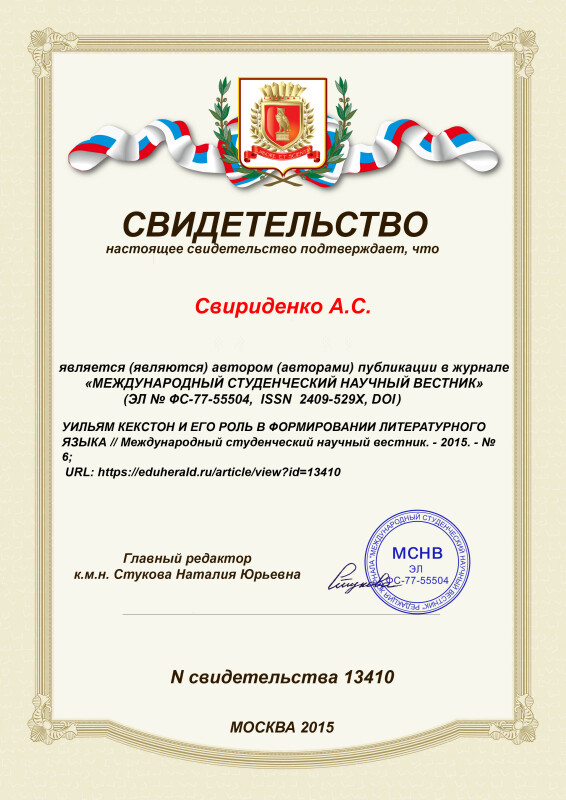 The distinctive feature of the 15th - 16th centuries in West Europe was an interest in issues of a language. The struggle for native language becomes a means of manifestation of national identity, and the possibility of the formation and development of the national language reflected a progressive point of view of cultural figures of the epoch.

The invention of printing made possible the rapid consolidation and mass dissemination of scientific research, information obtained as a result of the emergence of new industries and crafts, geographical discoveries. The printing contributed to the fact that education has become secular. In addition, this contributed to the establishment and development of literature in national languages, the unification of spelling and grammatical forms of writing.

Printed book became a means of disseminating and promoting forms of social consciousness, an instrument of social and ideological struggle. This is due to technical advantages of printing and it provided an opportunity to re-reproduction of texts.

The printing in Europe spread so quickly that in 40 years in 260 cities of the European continent at least 1,100 printing houses was opened. They published 40,000 publications with a circulation of 10 - 12 million copies.

The role of first printers in the development of spiritual culture of Europe was huge. Although the circulation of the first books were small from 300 to 600 copies, they changed the potential opportunities of communication and system of informational, cultural and religious life of Europe.

William Caxton was a native of Kent. The exact date of his birth is unknown; it is believed that it is about 1422. Up to 16 years, he served in London shopkeeper, wool merchant, and the next 30 years of his life he spent in Flanders, where he served as governor of the guild of merchants overseas.

Around 1470 William Caxton as a copyist begins to serve with sister of Edward IV and Richard III, the Duchess Margaret of Burgundy. In his new position, former merchant was able to travel more, including a trip to the continent. After a trip to Cologne, boring job as a copyist was dropped due to familiarity with a brand invention - the printing press. In Bruges Caxton in collaboration with the Flemish Kolar Mansion initiated the immediate establishment of printing.

In terms of language, the 5th century was a time of major events in the cultural development of Europe and, in particular, Britain: it was the age of the appearance of printing.

Printing was invented by John Gutenberg in Mainz (Germany) in 1438. December 13, 1476 William Caxton was the first printer in English. Returning from a trip to other European cities, he brought with him a real jewel - the printing press. The first book in the English language, "The Recuyell of the Histories of Troye" he published on the mainland, in Bruges, in 1475.

November 18, 1477 British first printer William Caxton published the first English dated printed book - an anthology of "The Dictes Sayings of the philosophers". Among the books, he printed were Chaucer's "Canterbury Tales", Gower in "Confessions of Love" and Malory's "Morte d'Arthur." He created more than 100 printed books. In addition, Caxton was famous as a translator.

Caxton never printed a Bible, as this was forbidden by law; from 1408, explicit Church permission was required to translate or even to read translations of scripture in English, permission, which was never granted. It was not until the Church of England broke from Rome that this proscription was lifted. The book known informally as the "Caxton Bible" was printed in 1877 for the Caxton Celebration in South Kensington.

Faced with the impossibility of printing many popular works in English, Caxton translated them by himself. Work on the translations made him face the difficult London dialect, and it made Caxton significant figure in the field of linguistics. Combining the elegance of French and English pedantry, the translator was also trying to make literature more understandable to the reader.

William Caxton remained a merchant, and it was in his best interest to sell the largest possible number of books. For this purpose, it was necessary to choose a language that can be understood by most readers. William Caxton collected information about English dialects of the time. Soon a graphic image of the words appeared on their basis.

The first decisive step to change the language in the direction of unification was "The Recuyell of the Histories of Troye", which Caxton brought to the Duchess Margaret of Burgundy. She found several mistakes but no one knew what mistakes. Therefore, the pursuit of profit helped the formation of English spelling.

With regard to spelling, Caxton adhered to tradition. This orthographic tradition was already outdated; discrepancies between spelling and pronunciation had already existed. Using this outdated spelling in print, Caxton secured it.

So, in the 6th century grammatical situation of the London dialect clearly displayed as the basis of a formed national language.

William Caxton died in 1491. Throughout his life, he produced more than 100 publications by publishing brand "WC", his pupil, Wynkyn de Word, inherited his printing press. The pupil continued the work of the master. Preserved examples of his publications can be found in Cambridge University Library, the British Museum and in private collections.

Caxton was not only a printer and publisher of books; he also was a great translator. His works as a writer and translator helped to improve the literary English language in the 16th century. Moreover, Caxton was the first who began to write the preface.

Copies of his books are in various private and public libraries. In the British Museum there are 83 Caxton's books, 25 of which are duplicates. The advantage of printing is relatively rapid creation of a large number of books. For booksellers it was better to have a large number of books as it simplified the sale and significantly reduced the cost of publication. Books became printed for a mass-producing; it was one of the aims of Caxton.

I believe that biographical researches will always be relevant, since the studying of the fate of people helps us to learn about the history of the cultural heritage.