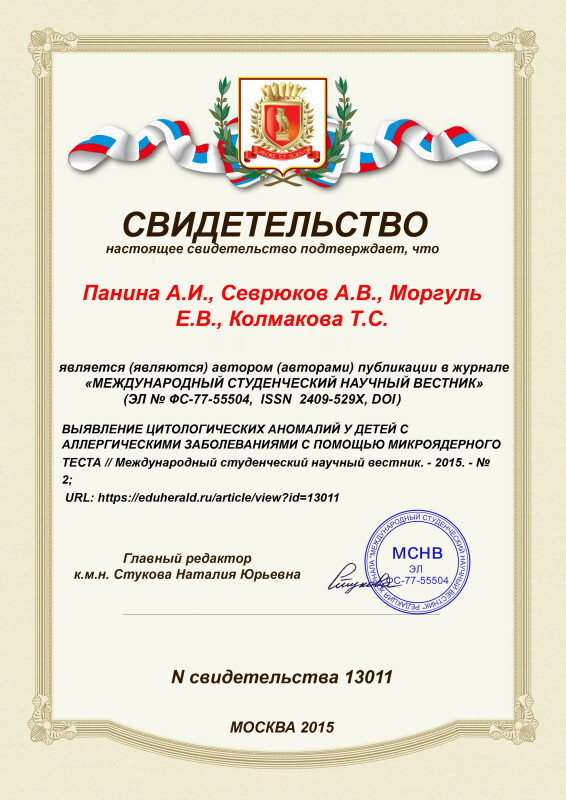 Now one third of the population of the world is suffering from allergic diseases, according to facts of World Health Organization or WHO. About 15-25% of Russian population are suffering from urticaria. More than 50% of patients with urticaria at the same time indicate the development of angioneurotic edemas, which are the most dangerous for children at the age of 1-3 years old. About 20% of Russian population are suffering from atopic dermatitis. More often than not the children at the age of 6 months – 3 years old are ill of atopic dermatitis. The development of allergic diseases is characterized with free radical mechanism of oxidation, which damages the genetic material of different cells. The research objective is to investigate the stability of genome of children with allergic diseases, such as urticaria and atopic dermatitis, and also to research the hormones, which are regulating the activity of these allergic diseases.

The assessment of stability of genome of children, which are suffering from allergic diseases, was full filled with the help of micronucleus test and detection of blood level of total 8-OHdG. The content of total IgE and hormones (cortisol and insulin) in blood was defined with the help of immune-enzyme analysis. We have analyzed 1000 cells from each child and have found out cytogenetic anomalies, such as: micronucleus, protrusions, multinuclear cells, karyolysis, karyorrhexis and the appearance of vacuole in the nucleus. The received results were compared with indices of the control group (n=10 children).

The children, which are suffering from urticaria, had greater frequency of occurrence of anomalies cells (82%) with a big quantity of cytological damages, such as micronucleus and protrusions, than the children with atopic dermatitis (59%). We suppose that such differences are evidence of severity of clinical course of allergic process.

The cytological and biochemical findings indicate of negative influence of allergic diseases on the stability of genome of children. So it can be the base of the formation of more serious forms of diseases, such as chronic, autoimmune, genetic and oncological diseases of children.