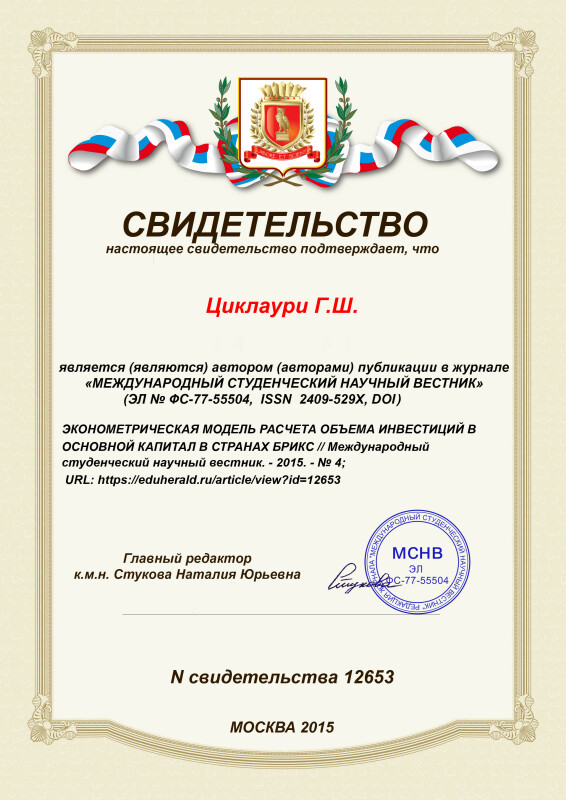 Given study is conducted in order to research econometric models for five countries of so called BRICS which will be used to predict gross fixed investments for 2014.

The aim of this study is to build an econometric model, to evaluate major coefficients and assess the model in order to calculate gross fixed investments for the end of this year using this economic-mathematical model. Construction of the model and all the calculations are conducted with the help of the special computer software Microsoft EXCEL. I took and analyzed data for 20 years (1994 – 2013). All the variables are estimated in US dollars, at current exchange rates.

In the given work, an economic model for the analysis and calculation of the fixed investments depending on two variables will be created.

But first let’s introduce BRICS, it is the acronym for an association of five major emerging national economies: Brazil, Russia, India, China, and South Africa. The grouping was originally known as “BRIC” before the inclusion of South Africa in 2010. The BRICS members are all developing or newly industrialized countries, but they are distinguished by their large, fast-growing economies and significant influence on regional and global affairs; all five are G-20 members.

So, formation of investment activity at the macro level is one of the most important characteristics of economic development of the country. With the help of information on investments, it is possible to judge about the prospects of development of the country as a whole, and of its regions. Without investment the competitiveness of produces goods and services is not possible, as well as it is not possible to overcome the effects of physical and moral depreciation of fixed assets, purchase of securities and investment in assets of other companies, etc.

The first variable is GDP (Y) of the country. Gross domestic product is the monetary value of all the finished goods and services produced within a country’s borders in a specific time period, though GDP is usually calculated on an annual basis.

As a result, we got five adequate models for countries of BRICS that passed majority of tests successfully. So these models can be used for calculations and prediction of the future volume of gross fixed investments.

To calculate the predicted values of the model parameters it is necessary to find forecasts of the two main variables GDP and average monthly wage. The model was based on the data for the period 1994-2013, so the volume of the gross fixed investment will be calculated and predicted for the year 2014. Thus, further calculation of the predicted values involves finding the value of the GDP and average monthly wages in the statistical database in 2014 (look table 1).

Finally, we calculated the predicted values of investments for 2014. For example in Brazil having variable Y=$2243 billion and W=$812,12 billion, investments in fixed capital will amount approximately to $416,14 billion. In the case of Russia an approximate value of investments will equal to $465,2 which is 3,22% more than in previous year. For India predicted value of gross fixed investments will amount about $593,53 billion in 2014 experiencing 10% rise compared to 2013. Even higher increase (12%) in gross fixed investments will be seen in China and will be equaled to $4971,65 billion. South Africa with lowest GDP and highest average monthly wage will have around $81,42 billion in the end of 2014.

However, in a subsequent analysis of the investment activity it is necessary to expand the range of variables that affect the amount of fixed investment as well as use other econometric and statistical analysis methods in order to calculate predicted future values of investment more precisely.