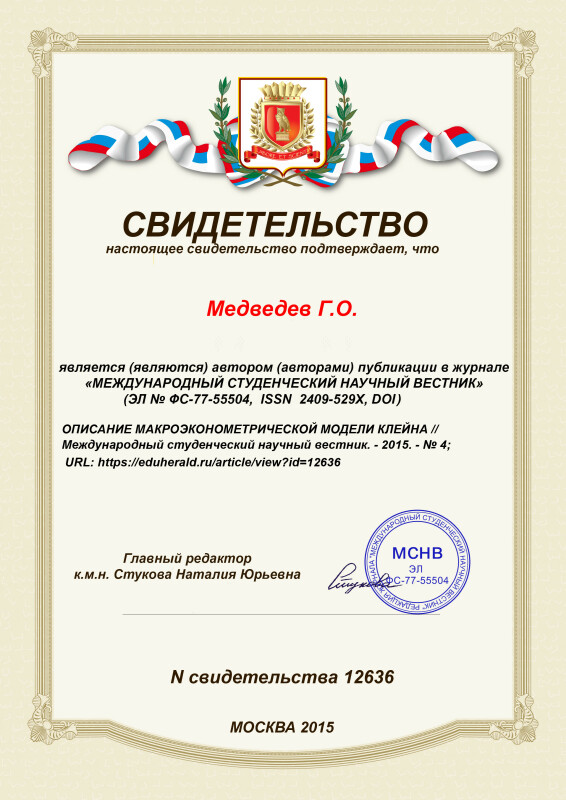 This work is devoted to the part of Klein econometric model. The original model contained 16 equations and was designed for United States economy between 1946 and 1947 and first published in 1950. This model has soon become very popular among the economists due to its tractability and adequacy. The model’s advantages are its simplicity, though it is reasonably complete. It is short enough to be described in a few pages, but at the same time contains all the necessary information. Klein model is a perfect example of building and using an econometric model and therefore is suitable for educational purposes. Even though the model’s original purpose was to represent the United States economy of early 20th century, which is a relatively closed economy, it still can be used in modern day research for other countries.

In my work only one out of sixteen equations will be taken up – the equation representing the demand for consumer goods. The equation from the model looks like this:

Ct is an exogenous variable and stands for household final consumption expenditure – the topic of the research. Yt and Tt are exogenous variables and stand for disposable income and tax revenue respectively. Ɛ stands for error and is a random disturbance that reflects the combined effect of other variables directly made explicit in the model, the individual effect on endogenous not relevant. a0, a1, a2 are parameters whose values are unknown and are to be estimated. Through the estimation of the parameters a quantification of the relationship between the Ct, Yt and Tt is acquired. t means annual data – it is the subscript that refers to the number of observations for which its validity is established. The subscript will refer to different points in time.

In order to check the adequacy of the model I picked 5 random countries and carried out several tests – the F-test, T-test, Goldfeld-Quandt test and Durbin-Watson test. The chosen countries are Germany, New Zealand, Canada, Singapore and Denmark. The data for the research was collected from World Bank data sources and includes values from 1980 to 2013 for the best accuracy.

T-test is used to find out significance of coefficients. As a result of the test, for Germany, Singapore and Denmark all coefficients are significant, while for New Zealand and Canada only disposable income is significant.

Goldfeld-Quandt test is used to check the model for homoscedasticity. Homoscedasticity is the situation in which the error term (that is, the “noise” or random disturbance in the relationship between the independent variables and the dependent variable) is the same across all values of the independent variables. Residuals for Germany and Denmark are homoscedastic, while residuals for New Zealand, Canada and Singapore are heteroscedastic. A problem associated with heteroscedasticity is the fact that the standard errors are biased. Because the standard error is central to conducting significance tests and calculating confidence intervals, biased standard errors lead to incorrect conclusions about the significance of the regression coefficients.

Durbin-Watson test is used to detect the presence of autocorrelation. For Germany, Canada and Denmark the residuals are positively autocorrelated. Autocorrelation is a mathematical representation of the degree of similarity between a given time series and a lagged version of itself over successive time intervals. It is the same as calculating the correlation between two different time series, except that the same time series is used twice – once in its original form and once lagged one or more time periods. For New Zealand and Singapore residuals aren’t autocorrelated. Germany, Canada and Denmark are autocorrelated because in their economies there must be other coefficients that influence consumption that are more significant that the ones present.

Summing up, it needs to be said that economy today is much more complicated than it used to be a hundred years ago, besides almost all economies are open. That’s why the model that worked steadily for United States economy in early XX century cannot be applied to modern world advanced economies. It still can be used for prediction in some cases, but it needs more complexity.