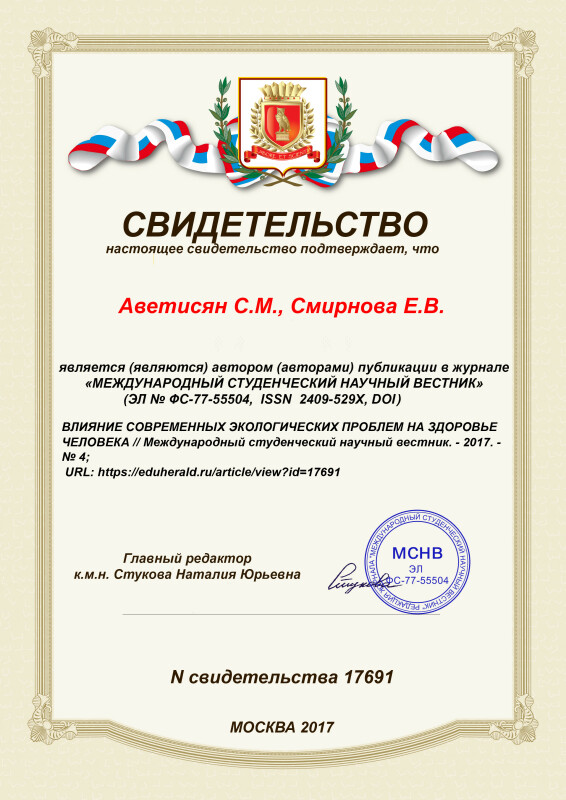 INFLUENCE OF CURRENT ENVIRONMENTAL PROBLEMS ON THE PERSON`S HEALTH

Article in PDF
0 KB
In the given article the authors describe current health and environmental effects data analysis. During the development of civilization men’s interference in nature has been steadily increasing. World industry pollutes the atmosphere with about thousand million tons of dust and other harmful substances and many cities suffer from smog. Most people believe their sickness is a result of radiation and negative impact of various pollutants. The authors note that some countries members of the United Nations Organization have organized the agencies on environmental protection to solve the problems in ecologically poor regions also the Greenpeace has been doing a lot to save our planet.
interference
take meaningful steps
adaptation
save the earth
human`s health

The theme of interaction the man and the nature has always been discussed over the centuries. It attracts attention of the specialists of different fields of science. All living oorganisms interact among themselves and form a part of our environment. The given paper intends to examine the relationship between the man and the nature and their mutual impact. Nature has served men as a source of their life. People have always lived in harmony with the nature and thought that they were endless. However, over the centuries men’s interference in nature has been steadily increasing and many territories have been polluted. Vast forest areas have been cut down by the logging companies and a lot of rivers changed their direction. In fact, it modifies the environment.leads to the imbalance on the earth [1; 2].

Such environmental issues as pollution, rapid migration and increase in population, unplanned urbanization etc. are common problems in all the urban areas.Man’s careless interaction with nature causes ecological crisis that is why the governments should take meaningful steps to create a programme of world ecological protection. Created new technologies should use less natural recourses. The authors note that some countries members of the United Nations Organization have organized the agencies on environmental protection to solve the problems in ecologically poor regions also the Greenpeace has been doing a lot to save our planet.

Ecology is the scientific study of interactions that take place among organisms and their environment. Most people believe their sickness is a result of radiation and negative impact of various pollutants [3]. However, the specialists have found out that in Russia today the influence of the environment on human health is only 25–50 % from the total influencing factors. Meanwhile, only in 30–40 years, according to the experts, the dependence of physical condition and health of the citizens of the Russian Federation from ecological factors will be 50–70 %. However, the strongest influence on human health has his shelter and the living environment as well as work location. Based on the data people spend approximately 80 % of their spare time inside the buildings and the indoor air is much worse than the outdoor because of the different chemical pollutants concentration (according to the data on average 4–6 times more); content of radioactive radon is ten times as large (on the first floors and in the basements maybe hundreds times as large); for aero ionic content 5–10 times as large. So, it is rather essential for the human health to take into consideration several factors when choosing a place to live such as: the floor he lives on, what material it is made of, the cover of the floor in the dwelling, the quality of furniture he uses, the number of plants in the house etc. What of the ecological damage influence human health more? According to the statistics it is air due to the fact that we breathe 24 hours a day. However, the air pollutants get into the human body not only through the lungs but also through the skin. It happens when a person is sweaty in summer and doesn`t take a shower at home, harmful substances have a chance to penetrate deep into his body. Day after day the air is getting more polluted with such dangerous substances as manganese, arsenic, selenium, xylene, asbestos, styrene, etc. It affects respiratory system of the human bodies and can be a cause of asthma, pneumonia, bronchitis, lung cancer etc. [4; 5]. Carbon monoxide emitted from motor vehicles and cigarette smoke greatly affects the central nervous system, as many probably noticed lately people have become more aggressive and imbalanced due to the harmful effect of these substances. According to Barry Commoner, American environmentalist: «Ecological pollution is the incurable disease. It can only be prevented by fundamental rethinking of the production process» [6; 7]. To conclude, people can change the nature, but it also can change us. Will the people have time to adapt to the new environment before it destroys them?

Problems of human adaptation to the environment have always been in the focus of the researchers` interest. In the history of our planet (from the days of its formation up to the present time), grandiose processes of a planetary scale that transform the Earth have been continuously happening. Since the human mind has appeared, a new stage in the evolution of the organic world began. Due to the global nature of human interaction with the environment, it becomes the largest geological force. As many foreign and our scientists prove – man’s productive activity influences not only on the direction of the biosphere evolution, but also determines its own biological evolution.

Specific of the human habitat is a complex interlacing of social and natural factors. In the very beginning of human`s history, natural factors had been playing a decisive role in the evolution of a man. The impact of natural factors on modern man is largely neutralized by the great number of various social factors. In the new natural and production conditions, people are often influenced by very unusual and sometimes excessive and even severe environmental factors, which they are not always ready to accept.

A human being, like other species of living organisms is able to adapt to different environmental conditions. Adaptation of a person to new natural and production conditions can be characterized as a set of socio-biological properties and characteristics necessary for the sustainable existence of the organism in a specific ecological environment. The life of each person can be considered as a permanent adaptation, but our ability to do this has definite limits. The ability to restore one’s physical and mental strength to a person is also finite. Currently, a significant part of human diseases is associated with the deterioration of the ecological situation in our habitat such as pollution of the atmosphere, water and soil, low-quality nutrition, increased level of noise.

Adapting to adverse environmental conditions, the human`s body experiences a state of tension and fatigue. Stress is the mobilization of all mechanisms that ensure a certain activity of the human`s body. Depending on the size of the load, the degree of preparation of the organism, its functional-structural and energy resources, the ability of the organism to function at a given level is being reduced, so it comes to the state of fatigue.

When a healthy person has a sensation of weariness, a redistribution of possible reserve functions of the organism may occur, and after some period of rest the forces will be restored again. People are able to handle the most severe natural conditions for a relatively long time. However, a person who is not accustomed to these conditions, experiencing them for the first time, turns out to be much less adapted to the unfamiliar environment than its permanent inhabitants. The ability to adapt to new life conditions is not the same for different people. Thus, many people having long-distance flights with the rapid intersection of several time zones experience such unfavorable symptoms as jet leg, sleep disturbance and their working capacity decrease when the others adapt very quickly.

Among the humans there are two extreme adaptive types. The first is a sprinter characterized by high resistance to the short-term extreme factors and poor tolerance of long-term loads and the reverse type is the stayer. It is amazing to note that in the northern regions of the country, people of the «stayer» type prevail among the population, which was apparently the result of long processes of population formation adapted to the local conditions. The study of human`s adaptive abilities and the creation of appropriate recommendations is now of a great practical importance.