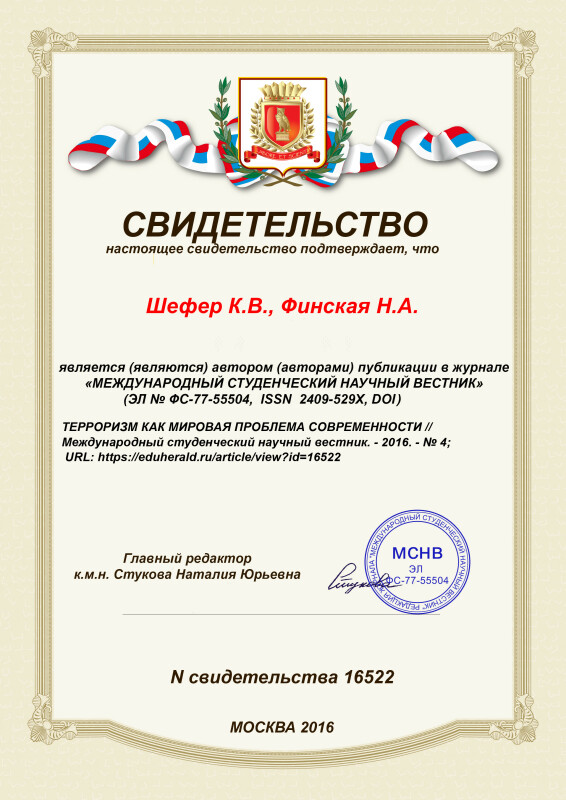 Every morning, turning on the TV we heed with anxiety the newscasts full of reports of terrorist acts. Terrorism has assumed an acute form, it is becoming perhaps a form of protest against everything, starting in pre-crisis and crisis periods of social development.

Since the mid-90s a new phenomenon is observed: the increasing activity of the Islamic terrorist groups, which is manifested in the actions of Islamic fundamentalists. Today’s «kamikaze» in the camps of Osama are prepared by the same «technology», choosing candidates from poor uneducated young Muslims. Deceived parents gladly give their children for free tuition to «Holy people», who «teach them the service of Allah» in the form of giving his life on the altar of the «Holy faith». From a young age up this Islamic fanatic sees life as a formal existence and expects a «happy opportunity» to carry out «go to heaven». After such a «Holy Martyr» equipped with a bomb vest or backpack, with button-contact fuse in hand, to neutralize it or to prevent an explosion is almost impossible. Voltaire got it right long ago: «Those who can make you believe absurdities can make you commit atrocities».

Pressure is growing on social networks to play a bigger role in finding and weeding out jihadists and others looking to recruit members and plot deadly attacks.

Speaking about the issue of terror, we need to come to know the particulars of the society ,why terrorism is so keenly developed in our time, and how to fight it! Terrorism has already gone beyond national problems of one particular country, now it is a worldwide problem of global proportions.