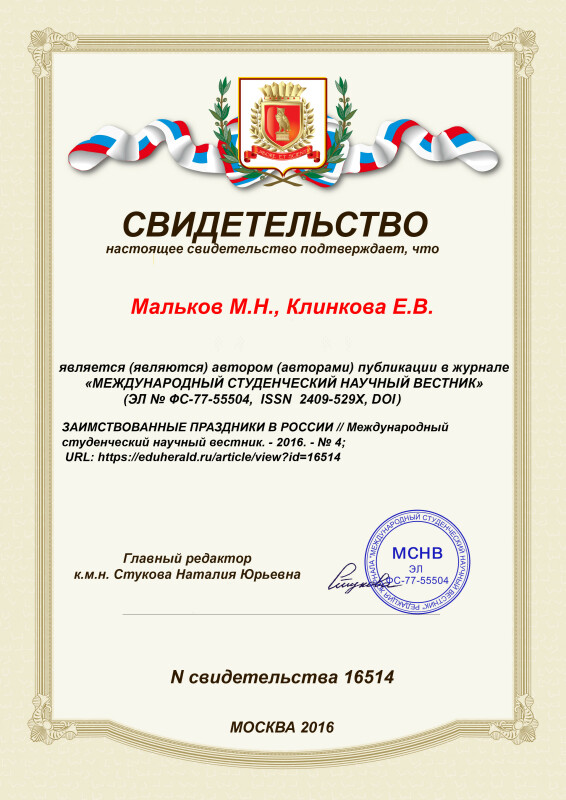 Characteristic feature of the present socio-cultural situation is the rapid growth of cultural exchanges, direct contacts between the two or more countries. This process covers all aspects of life in all countries and cultures of these countries. Thus, the borrowing of words and customs is a consequence of objective processes of economic and political rapprochement between the different regions, nations and states.

People borrow holidays because of the popularity of learning English in the world, also in Russia. But Russia and many other countries have their own similar festivals. Why are American holidays more popular? Because children are told about Valentine’s Day, Halloween in the lessons of English language and they start to think that these celebrations are national celebrations of Russia. But the English language, with it the foreign culture, has played an increasingly important role in our lives. We love foreign movies more than ours, western music rather than Russian one, buy imported machines, equipment, clothes.

Among Russian youth is quite popular American holiday such as Halloween. People have ceased to consider it as a borrowed holiday – it has already become a national one. In Russia there was a tradition to celebrate Thanksgiving day, but this holiday has not received a popularity.

We borrow not only American holidays, but also other foreign celebrations. We work very closely with the English-speaking countries, and it is not surprising that their holidays so accustomed to our life. The cultural exchange has always been good for humanity.