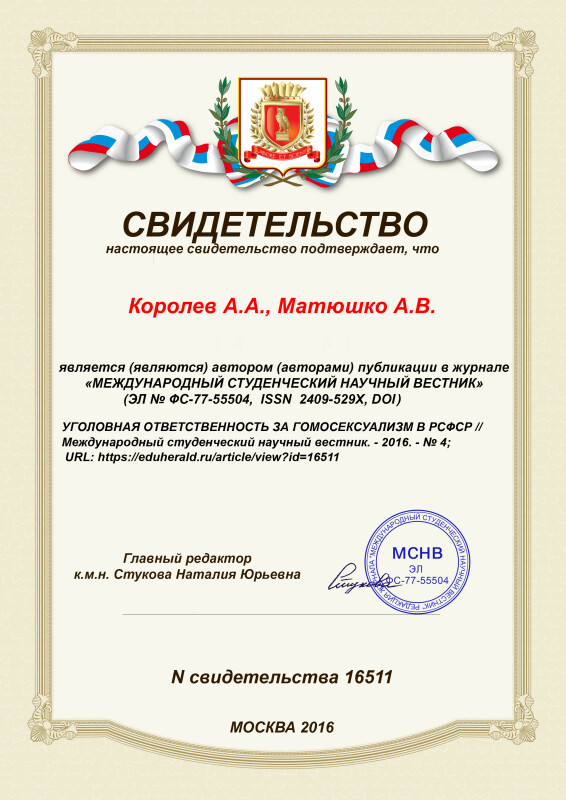 The criminal liability for homosexuality was introduced into the legislation of the RSFSR (RSFSR Criminal Code in 1926) March 7, 1934 and valid until June 3, 1993. In the Soviet criminal law, homosexuality is a crime against the person and is punishable by imprisonment for up to five years, and aggravated (for example, committing sodomy with minors) – for up to 8 years.

In the post-revolutionary law reform persecution of homosexual behavior, present in the Criminal Law of tsarist Russia, it was canceled: the RSFSR Criminal Code in 1922 there was no corresponding article in the 1920 article on responsibility for sodomy removed from the Criminal Code of the Caucasian and Central Asian republics. In 1926, at the invitation of the Soviet government of the USSR visited Magnus Hirschfeld, gay emancipator and founder of the World League of Sexual Reform – and as a result, in 1928 at the Copenhagen Congress of the InstitutfurSexualwissenschaft, which was announced on the basis of the League, the Soviet Union was cited as a model sexual tolerance. As the latest archival research, the initiator of the introduction of criminal prosecution for sodomy was OGPU. In September 1933, it carried out its first raid on persons suspected of sodomy, which resulted in the arrest of 130 people suspected of homosexual relationships. In a memorandum the Deputy Chairman of the OGPU GenrikhYagoda to Stalin reported on the disclosure of several groups in Moscow and Leningrad, who were engaged in «the creation of a network of salons, homes, brothels, groups and other organized groups of gays to the further transformation of the unions into direct spy cell ... active homosexuals, using caste isolation pederastic laps in directly counterrevolutionary purposes, politically decomposed different social strata of youth, in particular young workers and tried to get into the army and navy. On paper, Joseph Stalin marked: «We must punish the scoundrels, and enter the relevant governing law decree».