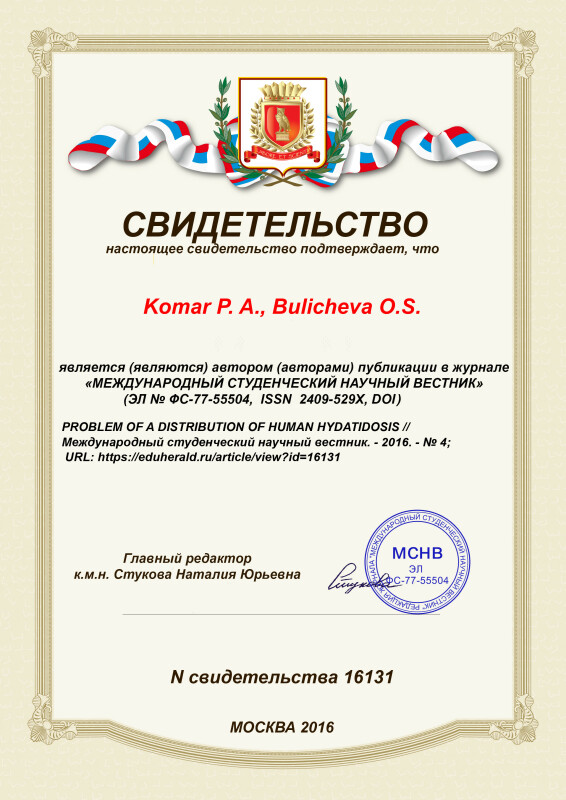 Human hydatidosis is a zoonotic disease that results from intimate contact with dogs. The percentage of infected dogs worldwide where dogs are used to herd domestic animals such as sheep may run as high as 50%, while the prevalence of hydatid cysts may be as high as 30% in sheep and cattle. Incidence among humans is relatively high due to the close association with dogs.

Symptomatology at infection with hydatidosis. The presence of unilocular cysts elicits a host inflammatory reaction that results in encapsulation of the cyst. The primary pathology of the unilocular cyst is impairment of organs from mechanical pressure. Increased pressure resulting from cyst growth may cause surrounding tissues to atrophy. The symptoms, therefore, are not unlike those caused by a slow-growing tumor, varying according to the tissues affected. It may take many years for symptoms to appear. For instance, while the liver is the most commonly affected organ, symptoms such as jaundice may take as long as 20 years to emerge. Pulmonary infections, characterized by a cough accompanied by allergic reactions, also are common. The brain, kidneys, spleen, and vertebral column may also be invaded and, over a protracted period, symptoms ranging from seizures to kidney dysfunction appear.

Conclusion. Significant inroads toward prevention of human hydatidosis can be made by reducing contact between dogs and intermediate hosts such as sheep, hogs, and rodents, and by educating the public to the danger of intimate contact with dogs, especially in endemic areas. As added measures, dogs should be treated regularly with anthelmintics.