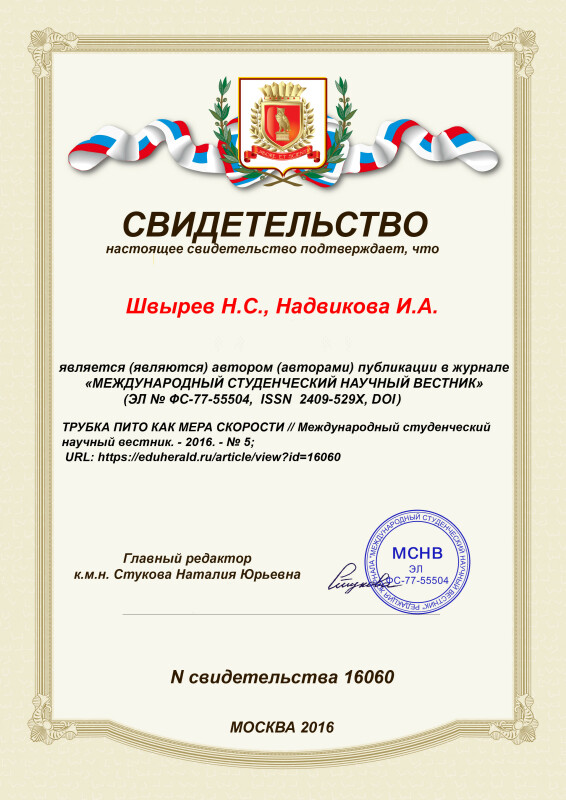 One of the most important characteristics of any aircraft is an air speed. Even the word «plane» we associate with “fast”. In the mid-18th century the French hydraulic engineer Henri Pitot, studying the flow of water, invented a device called the Pitot tube for measuring the speed of the flow velocity then in the mid-19th Henry Darcy modified it essentially. As a result, the Pitot tube has been applied to the measurement of wind speed, and it is equally useful as a log for ships or aircraft. A typical Pitot marine log consists of a pair of thin-walled tubes projecting through the bottom of the ship and bent so as to face the direction of motion. One tube is open at the forward end; the opening is referred to as the dynamic-pressure orifice [2]. The second tube is closed at the end but has openings at right angles to its length; these openings are the static-pressure orifices. The basic Pitot tube consists of a tube pointing directly into the fluid flow. The moving fluid is brought to the stagnates as there is an outlet to allow flow to continue. This pressure is the stagnation pressure of the fluid, known as the total one particularly in aviation which is generally measured using the static ports on the side of the fuselage. The dynamic pressure measured can be used to determine the indicated airspeed of the aircraft. Instead of separate pitot and static ports, a Pitot static tube may be employed which has a second tube coaxial with the Pitot tube with holes on the sides, outside the direct airflow, to measure the static pressure [1]. Moreover, Pitot tubes on aircraft commonly have heating elements called Pitot heat to prevent the tube from becoming clogged with ice. In case of Pitot tube malfunctions the incidents or catastrophic consequences may fall out. According to the French air safety authority BEA, in 2008 Birgenair flight 301, Air France flight 447 crashed dramatically.