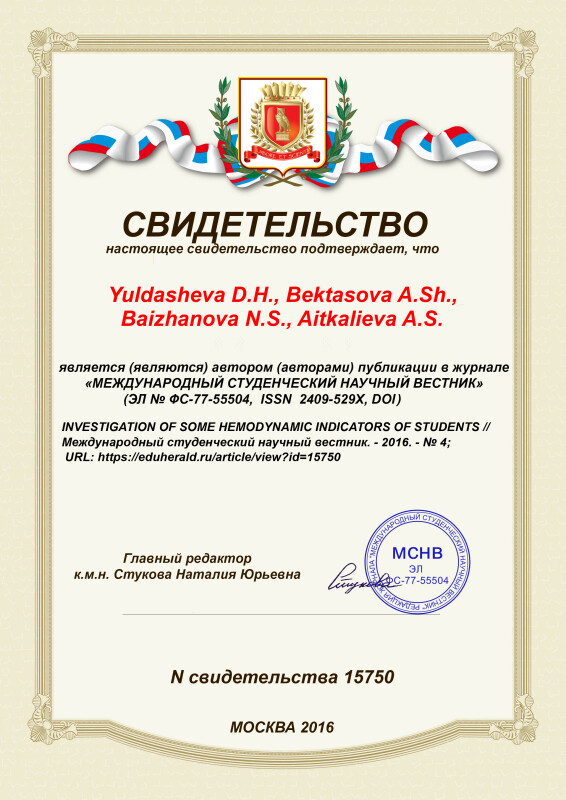 Functional condition of the cardiovascular system of the organism depends on many factors: the climatic and geographical features of the place of residence of man, his work and rest, the level of motor activity and others. Also, features of the location and climate of the city of Almaty - the zone of low barometric pressure, expressed daily and seasonal variations of temperature humidity, oxygen content in the air, bad ventilation and high air dust content1. Studying of a condition CVS of students enables to understand the adaptation mechanisms of the younger generation, their dependence on environmental and physiological factors.

The aim of the study was to determine a functional condition of some cardiovascular system indicators of medical university students. Indicators of cardiovascular system were studied according to gender, duration of sleep, mode of education and the involving to the sport. Also, were studied hemodynamic parameters depending on climatic and geographic region of residence of the student before his studies at the university.

In the study voluntarily participated 3rd year students (boys and girls) and boy-students from Afghanistan of the Faculty of General Medicine. For assess the functional condition of the cardiovascular system was determined the heart rate by palpation, blood pressure (SP, DP) by the method of Korotkov, height and body weight by the common methods. By the obtained data were calculated pulse, a DMP, SBV and MBV the volume of blood circulation. Adaptation potential was calculated according to the formula of R.M. Baevsky [2,3,4].

1. Data on indicators of condition of CVS according to gender.

Fig. 1. The average value adaptation potential according to gender

According presenting data, showed that pulse rate, blood pressure of boy students and girl students in the normal values. The value of the Minute blood volume was higher in girls compared with boys at 14.5%. Adaptive capacity of girls was lower by 17.3%.

2. Data on indicators of condition of CVS according to sleep.

The duration of sleep during the week below the physiological norm appeared in 60% of the students, and not fill up mostly girls.

Fig. 2. The average value of adaptation potential according to duration of sleep

Indicator of SBV in students with normal sleep duration is more than in students with sleep deficiency by 1.7% and the MBV - 1.5%, respectively. So, the value of SBV and MBV of compared groups differ only slightly.

But, at the same time differences by AP indicator more evident, it equal for about 4%. This fact indicates the less satisfactory adaptation of CVS in students with a shorter duration of sleep.

3. Data by indicators of CVS depending on Sport activities.

It is known that exercise stimulates the function of the CVS: increase the contractility of the heart, improves blood circulation of organs, tissues5. 43.3% of the students do sport, and more of them are boys. The values of SBV and the MBV in athletes are 55.63 ml and 3835 ml, correspondently. Values of SBV and the MBV of students with less physical activity are 61.72 ml and 4845 ml, respectively. Adaptation potential of student - athletes was higher than index students not involved in sports by 15.3%.

Fig. 3. The average value adaptation potential according to physical activity

4. Data on indicators of CVS depending on studying timetable.

The literature data suggests that at students during their studies at the university observed shifts by many systems, including the cardiovascular system. Its observed a result of the not favorable effects of a number of factors, which include violation of the day mode and food mode.

Fig. 4-5. The average value CVS indicators according to lessons time

As can be seen from the figure, the values of indicators of SBV and MBV of students who study at the second half below normal values(normal: SBV 60-80 ml, MBV 4.5-5 liters). When comparing SBV and MBV data of students studying in the first half of the day, these figures were lower than of students of first half study. Also the AP more favorable in students with first shift than students 2nd shift.

4. Research data according to the climate-geographical factors.

Fig. 6. Сomparison of CVS indicators and AP of local and foreign students

2. The value of the adaptive capacity of the circulatory system of young people (or students) indicates a satisfactory adaptation.

3. 60% of the students sleep time on weekdays below the physiological norm, and in most cases girls sleep less. Indicators SBV and MBV of students with a lack of sleep is lower. Also, found less satisfactory adaptation of the CVS of students with a shorter duration of sleep.

4. Indicator "Adaptation potential" of student-athletes is higher than in students are not involved in sports, which indicates a more satisfactory adaptation of the circulatory system of athletes.

5. Presented data of SBV and MBV, data on adaptive capacities show a more satisfactory adaptation of the circulatory system of students who study in the first half of the day.