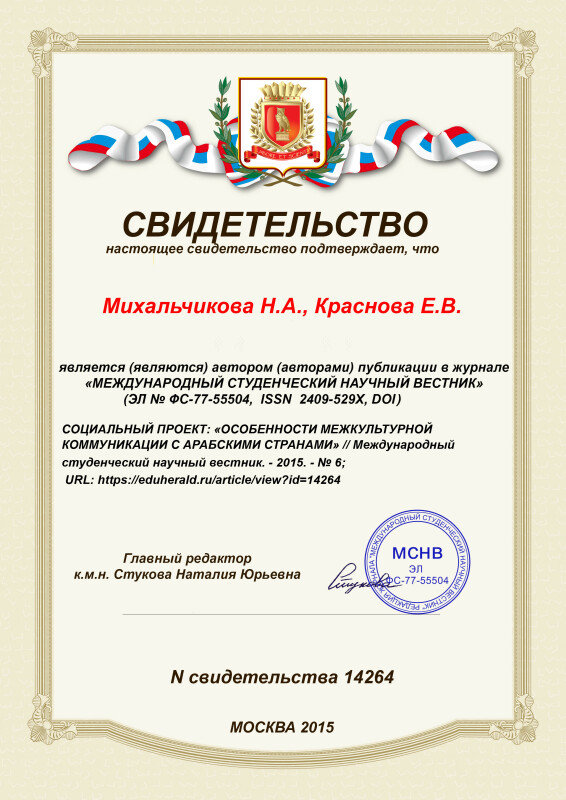 SOCIAL PROJECT: “PECULIARITIES OF THE CROSS-CULTURAL COMMUNICATION WITH ARABIC COUNTRIES”.

Article in PDF
35 KB
The present paper deals with a communication style of the Arabic World, including important problems of so called intercultural communicational gaps that take usually a place among the members of different cultural communities. This paper observes the social questioning that was made throughout the Arabs living in Rostov-on-Don. The high-context, low-context cultures are touched upon along with linear-active, reactive, multi-active cultures and their correlation with each other. The article summarizes that both Russians and Arabs are situated on the same line in this triangle, consequently, we are supposed to have an easy going communication. This paper helps to understand better the peculiarities of the cross-cultural communication with Arabic people. This article is highly recommended to people who are interested or work in the sphere of intercultural communication.
the social questioning.
multi-active cultures
reactive
linear-active
low-context
the cultures of high-context
the Arabic World
cross-cultural communication
Every human culture can be identified by those characteristics, which make it unique and different from other cultures in the same sense as every human being has a personality that makes each person different from all others.  Without any doubt, the Arabic culture has a rich history background that makes it unique, different from other cultures and so interesting field for investigation. While this project has being made muchcuriousand sometimes shocking information about cultural values, differences, communication styles of the Arabic World were discovered. Nevertheless, all this information was taken only from books and internet resources. In this way, a face to face communication with representatives of the Arabic culture was needed. The decision to make a social questioning among the Arabic students who study in our city was taken. It was necessary to find out their opinion about living in Russia and about communication difficulties and misunderstanding between Russian and Arabic nations.All 26 participants were asked the same questions:

3)      What do you find difficult while communicating with Russians?

4)      Can you name in common things between Russian and Arabic mentality?

5)      Did your stereotypes about Russian people turn out to be right and true to life?

8)      What changes would you like to see in the way of communication style of Russians?

The participants were the representatives of the following Arabic states: Syria, Lebanon, Palestine, Iraq and Yemen. The overwhelming majority of the students were Muslims. Moreover, 31% were Christians. In order to demonstrate more clearly the results of questioning the form of tables and diagrams was chosen.

Table 1 Top of the stereotypes about Russia

By obtaining such kind of information it is possible to find the reasons why sometimes the communication with people from other countriesis not smooth and perfect. But it is essential to know these facts, to improve ourselves, to correct mistakes.The Arabians gave answer for the 8th question:” What changes would you like to see in the way of communication style of Russians with the Arabs in future?” And it is a funny thing to notice but everyone said the same fact. “The communication between Russian and Arabic people would be easy in this way, if Russians knew that the Arabic countries are prosperous, civilized. The Arabs also like the peace and friendship and not each person on our land is terrorist. We have our cultural rich background, rich history. And it would be very nice if more people would like to open our culture for themselves and if more people would be willing to communicate with the Arabs and to visit our land, not only UAE and Egypt.”

As all the Arabic students noticed “If the Russians knew better our history, the reality of our lives, it would give them background information that would make it easier to ask questions that make sense.” However, we do not need to be an expert in some culture to be able to ask questions.  We simply need to learn to  respect other cultures and also we have to educate ourselves and keep informed about other cultures so that we understand the issues that people faces and we become involved in their struggles – instead of sitting on the sidelines and watching from a distance.

I consider all information that had been collected during this social questioning unique. Because this is a personal opinion, a clear view of the case, belonging to    people who was born and brought up from childhood in the Arabic cultural surrounding.  These people gave us the answers and explanations why our communication with people from other countries is not always smooth and perfect. But we need to know our drawbacks to correct them and improve our communication skills.  And also we should learn to be sincerely interested in another country’s culture, history, background. As when you are open to know new cultures, people will tell you many interesting facts about their way of living in their country. That’s explains their behavior, traditions, customs.  We realized that we are able to form relationships and alliances with people of different cultures and backgrounds.