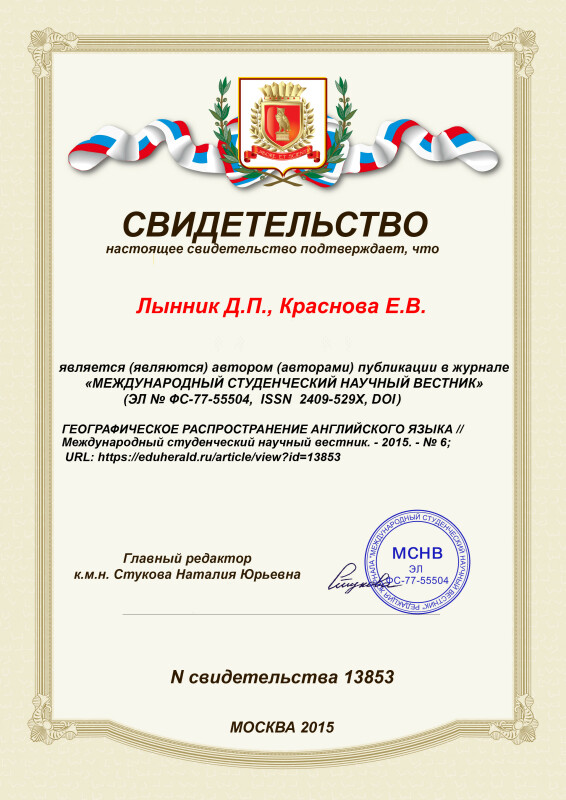 GEOGRAPHICAL EXPANSION OF THE ENGLISH LANGUAGE

Article in PDF
80 KB
The peculiarity of the English language is its expansion as national and official language outside England.Nowadays it is one of the most popular languages: about 300 million people speak English as their national language in different parts of the world and 80 per cent of all world information is presented in English. However, several ages ago, this language was not so popular and was spoken only in England; it has spread to all continents of the world in the last 300 years. The expansion of England played a great role for the History of the English language and for its linguistic development.
national language.
area of distribution
expansion of England

Geographical expansion of the English language

The subject of this paper is geographical expansion of the English language.
This matter is topical because nowadays English is one of the most popular languages in the world, it is spoken all over the world and it is an official language of many countries. What is more, 80 per cent of all world information is presented in English. However, several ages ago, English was not so popular and it was spoken only on the British Isles. In the beginning of the XVII century, it came outside of England.

The general aim of this paper is to explore theprocess and area of distribution of the English language.

The peculiarity of the English language is its expansion as national and official language outside England. There are many reasonsfor it, and one of them is expansion of England.

Scotland began to fall under English linguistic influence from the XI century. The mixed population of Scotland was not homogeneous in language. [5,184]

In the XVII century, Scotland was finally annexed to England. In 1603 Scottish king Yaakov I became the king of England as Yaakov VI. However, Scotland was independent until 1707 when Scottish and English Parliaments were united.

According to Ivanova I. P. the Scottish language can be considered to be  a Scottish variant of the English language.

English was forcibly spread among the population in Ireland since the XII century.

Although Irish people stubbornly defended their national culture and language, English has gained a dominant position in the country. [2]

In the beginning of the XVII century Ireland was annexed to England, however the struggle against English domination was not finished in the XVII and XVIII centuries.

"In 1922 the Irish free state was formed and in 1949 the new state - Eire - left the Commonwealth of Nations. Now Eire occupies the whole but the Northern part of Ireland, which is a part of Britain. The number of people rose from 300 thousand to over 600 thousand, but the majority speak English." [6,70]

"The penetration of the English language to other parts of the globe mainly began in the XVI century together with the expansion of British colonialism. The XVI century was an age of great adventurers, and England's progress in the discovery and colonising field was tremendous." [6,70]

The first English expansion to the New World began in the 1583. However, they were unsuccessful and did not letpermanent settlement. Therefore, it can be considered that real start was later in 1620.That year, the sheep "Mayflower" set sail from England shores. Men, women and children were on board. They came to the East coast of North America and founded a colony there - New England. The population of America increased.

As V.D. Arakinsays, the first immigrants were representatives of English peasantry, small and medium bourgeoisie. They were trying to escape from the oppression of capitalism in England.Differences in vocabulary of English in Britain and in America and peculiarities of pronunciation have given a basis for statement that there is an independent language - "American" language. However, the actual language system shows that basic vocabularies and grammatical structure is the same both in England and in America.  [1,196]

"The colonists spoke different dialects of English. In North America these dialects gradually blended into a new type of the language: American English." [5,182]

As it follows from B.A. Ilish, existing variances is not enough and he distinguishes two variants of one language.

According to this information, the theory of the existence of the "American" language is contrary to the facts. Nowadays the English language in the USA is considered as an American variant of English.

In XVII century, English colonizers penetrated into Canada, where French settlements have already existed. Canada was a French colony until the XVIII century.

Since the mid-XVIII century, a great flow of British immigrants headed to Canada. Except the British, there were the Scots and the Irish who were also taken part in this immigration. They  settled a territory which was called Nova Scotia.

The struggle between French and English settlements was solved by armed invention of Britain, and in 1763, Canada was annexed to the British possessions. Canada became a dominion in 1867. Since 1931, it is a country of the British Commonwealth. [3, 47]

Nowadays English is an official language of Canada.

Australia was recognized as livable area after the expedition of George Cooke in 1770 and it was used as a place for references of the convicts since 1778.

The colonization of Australia began in the late XVIII century. It increased sharply in mid-XIX century. Because of the great flow of immigrants and development of capitalism in the late XIX century English-speaking Australian nation was developed. [2, 215]

The main reason for migration of a huge number of people was the discovery of gold deposits in the middle of the XIX century. This attracted adventurers and paupers who was called diggers.

In search of gold diggers destroyed the local black population. The farming population was formed here. Australia has turned into agricultural country and it supplied England with bread, meat and wool. Since 1931, Australia is a country of the British Commonwealth of Nations. [3, 48]

Nowadays there are some disputable issues concerning English in Australia. On the one hand, British intelligentsia uses British standard of the language, while the opposition to the British administration points out rights on their own independent language.

The literary language of Australia focuses on British language standards.

As for Asia, England took advantage of the internecine wars of Indian princes.

"The conquest of India had been prepared by the activities of the East Indian trade company founded in the XVII century. In the late XVIII century Britain secured partial control over the administration in some of the Indian provinces". [5,182]

India became British colony in the XVIII century. Nowadays English is widely spread in Asia. However, the English language could not displace many national languages.

The spread of English in Africa was a lengthy process, as a result of which in the XIX century Sudan and Egypt fell under British political control.

Summing up the results of the conducted analysis the following conclusion can be made: the English language has spread to all continents of the world in the last 300 years. The expansion of England played a great role for the History of the English language and for its linguistic development. Nowadays about 300 million people speak English as their national language in different parts of the world. It is obvious that English will continue to spread and develop.