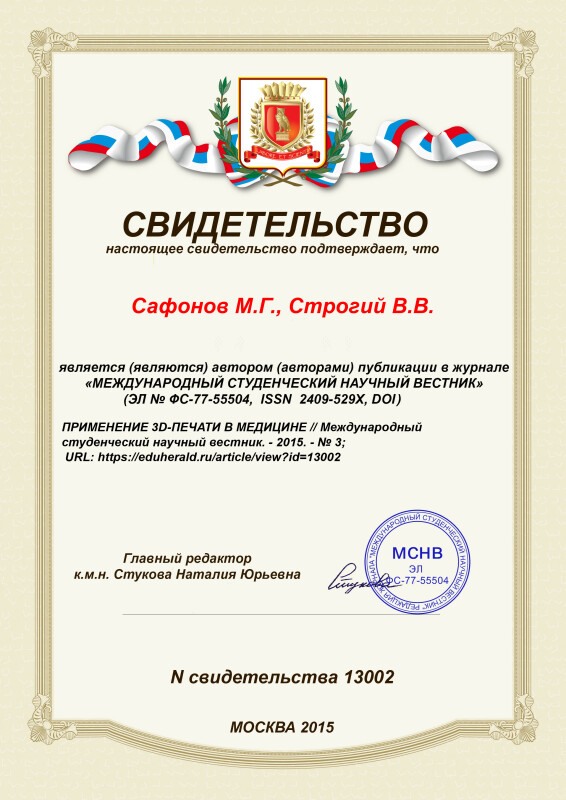 21th century continues to surprise us with new technologies. Take-out electronic devices, computers the size of a coin, electric vehicles and other. No doubt, that one of the most interesting and useful invention of the last time is the 3D printing. Though this technology was invented in 1980s, the wide commercial distribution and promotion of three-dimensional printing has occurred only in 2010, when the 3D-printers have become affordable for everyone.

This article reviews of using of three-dimensional printing methods in biomedicine, information on the most advanced research in this area, as well as prospects for development in the coming years.

In nowadays, biotechnological companies and scientific institutions are doing research in the direction of biological 3D-printing. The research is studying the possibility of using inject / dropping 3D-printing in tissue engineering to create artificial organs. The technology is based on the application of the living cell layers on the substrate or sugar gel matrix, with the gradual buildup of a fiber to create 3d structures.

Nevertheless, despite the high level of technology are still problems in our society, such as doctors which are not possible to return the patient to a normal lifestyle. According to Pulitzer Center in 2014, the total number of fatalities in car accidents of the world has reached 1.24 million deaths per year, with more than 50 million people were seriously injured. One of the recent discoveries of Japanese scientists could help many of these people.

Fig. 1. 3D-printer that prints the basis for bone tissue

Doctors from the Research Institute of Samuel Lunenfeld, medical complex at Mount Sinai Hospital, teamed up with bioengineering, biology and surgeons, trying to explore the possibility of using the patient's own tissue to create new bone. The study, a methodology was developed, the key element is the 3D-printer (Figure 1). With the help of MRI technology scanned the damaged bone, which is based on the results of three-dimensional model. Then, from a special biodegradable porous material is printed an exact copy of the damaged item. This material promotes the growth of cells, and cartilaginous tissue accumulates easily derived stem cells of a patient.

Gradually, a bone has a shape then materials dissipate. As a result, there is only the bone, which has no different between the original one. [3] This technique can help affected people rebuild their bones, damaged in an accident, fights, with gunshot wounds, or in the course of diseases such as arthritis, gout, etc.

Used in modern medicine, artificial blood vessels are typically made of plastic, and can cause the development of bacterial infections in humans.

The Japanese company Cyfuse Biomedical and University of Saga jointly developed printing method arteries using skin cells of the patient and 3D-printing technology. To create a three-dimensional shape of the vessel tissues, researchers found in 3D-array printer metal needle length of 10 mm and a diameter of 0.1 mm. Adjusting the length of the needles and their number, researchers can change the thickness of the blood vessels.

Now experts are testing on animals transplanted arteries. Upon completion of clinical trials, the researchers plan to use this technology for the treatment of people already in 2018. With the proliferation of technology, such diseases as diabetic necrosis, diabetic angiopathy, gangrene, etc. can be cured by simply grafting new vessels to replace the damaged [4].

The advent of 3D-printing played a major role in the field of prosthetic limbs. Using the 3D-printer, the engineers were able to create as complex electromechanical prostheses with a low cost ($ 50), not inferior in performance expensive models (from $ 10,000) and simple mechanical prostheses, so much gaining popularity in children prosthetics.

Scope of application of three-dimensional printing catch the imagination, making it possible that a few years ago seemed impossible. The prospects offered by this area are noteworthy research teams around the world, and this young technology will undoubtedly give us many more surprises and opportunities.