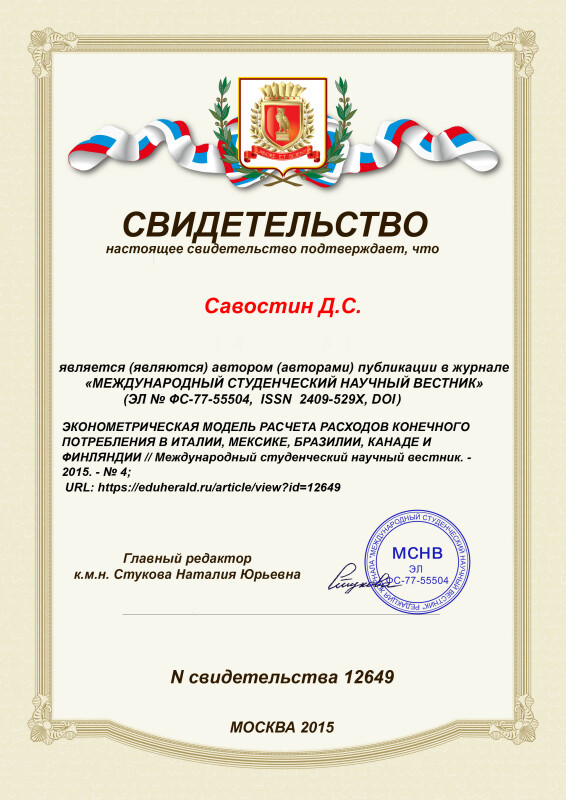 Given study is conducted in order to research econometric models for five countries of Italy, Finland, Mexico, Canada and Brazil where our economic system studies the final consumption expenditure of households in terms of two variables, tax revenues and GDP, both measured in US dollars.

Our goal is to test the adequacy of the empirical data of our consumption function, for this we will use Statistical Hypothesis Testing. We will draw conclusions that allow accepting or rejecting a hypothesis about the value of an unknown parameter.

It has been decided to build a model on a basis of “first equation of Lawrence Klein which is called consumption model”. Only those factors which will be able to explain the variations in the dependent variables will be left in the final output of the model and afterwards tested.

In this study we apply the consumption function: “Ct=a0+a1×Yt+a2×Tt+εt” to five countries: Italy, Finland, Mexico, Canada, Brazil. The database of the World Bank was used because of their reliability. For better quality of the model we used the data collected 1980 to 2013. The data used for the construction of economic model is acquired from the online database available via World Bank group site

The time period for the analysis is set as year 1980 – year 2013 thus giving the economic model 34 observations which in turn can be conveniently divided in 2 groups of 17 years each while performing the Goldfeld–Quandt (GQ) test during the construction of the regression model. The data before year 1980 is not taken into consideration due to the absence of information in the World Bank Group database for certain variables. The latest year available for all variables – year 2013 – is not included in the primary analysis as it is taken as a control sample for the adequacy check of the whole model performed closer to the end of the report.

Firstly we start from R²-test. R² is close to 1 in all models, therefore, there is a high dependence

F is higher than F-crit than the R^2 is non-random and the quality of the specification of the model is high.

The GQ test checks for homoscedasticity in regression analyses in order not to allow overestimation of the model’s results. The test is also sometimes called two-group test as it is based on the division of the dataset into two independent groups. As we can see, for Italy both conditions are true, therefore residuals are homoscedastic and 2nd Gauss-Markov condition is confirmed, for Finland, Mexico, Canada and Brazil the residuals are heteroscedastic

Heteroscedasticity is a major concern in the application of regression analysis, including the analysis of variance, because the presence of heteroscedasticity can invalidate statistical tests of significance that assume that the modelling errors are uncorrelated and normally distributed and that their variances do not vary with the effects being modelled.

Verifying the model’ adequacy actual data lies between the boundaries of predicted data in all cases – it means that the model is adequate and can be used for predictions.

Reckoning all above, as we have learned, the model is adequate and can be used for predictions. Despite concerns expressed above our final economic model shows high relevance of the independent variables for the explanation of the dependent one due to the high R2 value and a number of tests, which have been successfully run during the model check.