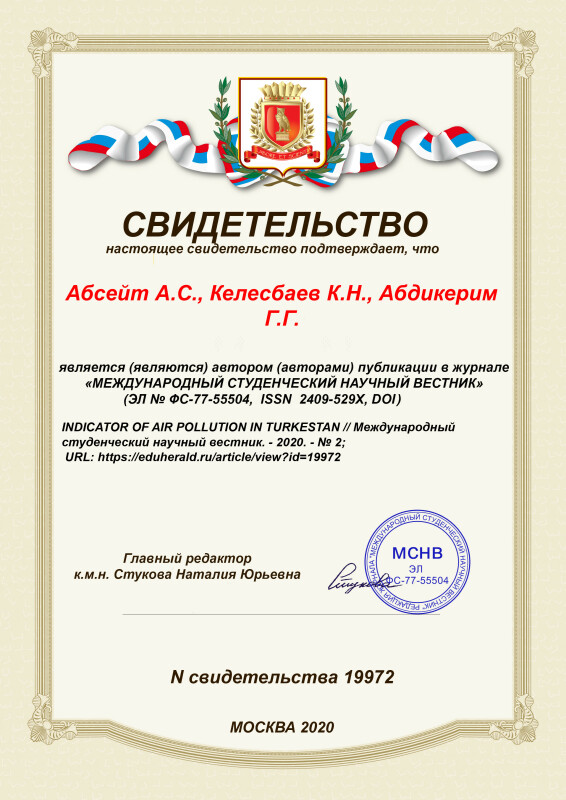 INDICATOR OF AIR POLLUTION IN TURKESTAN

1
Абсейт А.С. 1 Келесбаев К.Н. 1 Абдикерим Г.Г. 1
1 Международный казахско-турецкий университет
This article touches on the environmental contamination from some anthropogenic factors about what harmful factors have the greatest impact on the human body, as well as on nature as a whole. The volume of distribution of gases transferred to the atmosphere is determined by a special gas analyzer, the values of their deviation MPC are determined. On the territory of the city of Turkestan MPC several gases: NO2, CO, NO, H2S SO2 showed a high value of nervous system fluctuations, diabetes mellitus, and allergic diseases spread by various respiratory tracts. Residents of the city occupy a leading position in diseases such as bronchitis, asthma, high blood pressure, anemia, nervous system, diabetes, allergies. The fight against these gases has become a problem of ecological problems of our city.

Pollution of our nature, including air, water and soil, has caused many deaths of nearly 9 million people.

Intense air pollution began in the 19th century due to the rapid development of industry, which began to use coal as the main fuel, and the rapid growth of cities.

Basically, there are three main anthropogenic sources of air pollution: industry, domestic boilers, transport. The share of each of these sources in total air pollution varies greatly depending on the location.

But coal is not the only source of atmospheric pollution. Now a huge amount of harmful substances are emitted into the atmosphere every year, and despite the significant efforts made in the world to reduce the degree of air pollution, all this is happening in the developed capitalist countries. At the same time, the researchers note that if over the countryside harmful impurities in the atmosphere are now 10 times more than over the ocean, then over the city they are more than 150 times. [1-4].

Anthropogenic pollution is the result of human activity. The most common problem on the planet is a large amount of accumulation of household waste and industrial waste. Previously, waste was organic matter, and they quickly disintegrated into simple compounds. Today, some enterprises pollute the environment with solid compounds, the decay of which can not happen in a short time. Their rapid accumulation contributes, to some extent, the lack of bacteria for their decomposition, it is dangerous for our health. As a result of human initiative, air pollution occurs. Irrevocable changes are gradually occurring in the atmosphere [5-7].

The important factor of negative impact on the environment is thermal pollution: when combustion air is heated to combustion temperature, and the excess hot flue gases discharged into the atmosphere. Heat emissions in large cities lead to an increase in air temperature by several degrees, which affects changes in the microclimate, chemical and gas composition of water bodies and groundwater, the mechanism of pollution transport, etc. The main harmful substances obtained in the process of complete and incomplete combustion of coal are carbon oxides CO, CO2, nitrogen NO, NO2, sulfur SO2, SO3, soot and ash, as well as , depending on the characteristics of the fuel composition, derivatives of mineral impurities of the fuel, such as heavy metals, metal oxides: iron, aluminum, magnesium, arsenic, chromium, manganese, silicon and calcium compounds, hydrogen sulfide, hydrogen chloride, formaldehydes, benzopyrene, etc. Studies of flue exhaust gases of power plants have shown that almost half of the total amount of harmful substances in the combustion of coal is carbon oxides, up to 20 % – sulfur oxides, about 8 % - nitrogen oxides and up to 20 % - soot, ash and derivatives of mineral impurities [8].

The purpose of the study: to identify the level of air pollution in Turkestan, control the impact on the environment and humanity.

Objects and methods of the research.

Organizations with mass stay of people in the city of Turkestan, University campus, places of rest, Park, Central streets where transport is often transported were taken as object of research.

The total area of Turkestan is 196.27 km2. The population related to the year of 2018 was 164,413. In accordance with the decree of the President of the Republic of Kazakhstan N. A. Nazarbayev dated September 1, 2018, significant changes have occurred since the transfer of the administrative district of South Kazakhstan region to Turkestan region [9]. The number of immigrants from abroad is growing, the share of small and large enterprises of the city, transport and private cars is increasing. This, on the one hand, is a good indicator, on the other, can affect the deterioration of the city's ecology. The increase in the amount of harmful emissions into the atmosphere from anthropogenic influences, given in the above section, significantly reduces the standard of living of the city population, increases the number of various oncological, cordiological and neurological diseases, etc. The amount of gases in the atmosphere was determined on a special device.

We carried out with the use of universal gas analyzer GANK-4 (measuring height up to 2 meters from the ground) regular measurement of emissions of harmful gaseous substances. When using the gas analyzer "GANK-4" chemical cassettes or built-in sensor are used. The cassette is designed for approximately 1000 samples for work area air and / or ambient air. The built-in pump sucks the analyzed air through the inlet nozzle of the gas analyzer and passes it through the sensor or tape of the chemical cassette. The cassette is changed manually and takes no more than 1 minute.

In order to determine the level of air pollution in Turkestan received 6 main objects. They: The Central square of the city, Yessimkhan street, IKTU named after H. A. Yasawi, B. Sattarkhanov Ave., 29, Park Pobeda, Yerubayev Street. The studies were conducted from the end of November to December, to determine the average amount of gases every 10 days. Air temperature—10 C, relative humidity-96 %, atmospheric pressure-752 mm. hg. wind speed – 2 m/s.

The results are presented in Table 1 below.

Table 1. Characteristics of harmful substances in the air in the presence of smog (2019).

The table above shows that the number of gases NO2, CO, NO, H2S, SO2 exceeds the MPC. To determine the harmfulness of these harmful gases distributed in the air to the human body in the period from 2017 to 2018, statistics on the incidence registered in the Central hospitals and polyclinics of the city of Turkestan were carried out. Thus, in 2017 (January-June) the number of patients with high blood pressure was 26.5%, poisoning, respiratory diseases-8.2%., this figure in 2018 (January-June) increased by 27.1% , cases of poisoning, respiratory diseases-by 8.9% [10].

So according to the results, the report on Kazhydromet 2016 in Turkestan, the low pollution rate of cities that are included in the list. But over time, the current state of the city worries. As the population of the city increases, the increase in emissions and in the number of vehicles, small industrial complexes, in turn, rises the amount of emissions into the atmosphere. With excessive increase in the size of harmful secretions negatively affects the health of citizens.