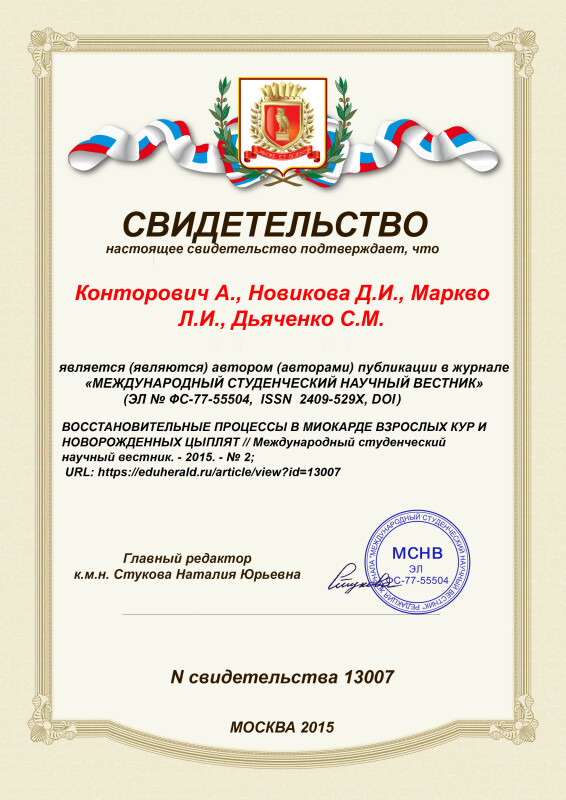 Study of reparative regeneration of myocardium in lower animals than mammals and men, has an important value for understanding basic laws and reasons, inhibiting the muscle regeneration of heart in mammals and men. According to literary data, myocardium of some young rats is capable of partial formation of new cardiomuscular fibers (P.P. Rumyansev, M. Robledo). However, L.V. Ahabadze and V.N. Galanin’s researches showed that reduction of wound sizes took place not due to new formation of cardiomuscular fibers, but due to a postnatal height and heart development. In the opinion of some researchers (V.G. Cyplenkova, 1972), in atrial myocytes, compared to ventricular cells, synthetic processes are expressed stronger, which can play a substantial role during regeneration. Absence of comparative phylo- and ontogenetic researches of regenerative processes in damaged hearts in animals of different levels of development is one of the reasons for insufficiently effective resolution of issues of myocardium regeneration in men. It is therefore necessary to study regenerative possibilities of damaged myocardium in birds in different periods of ontogenesis. In this work, a comparative histological study of regenerative capabilities of auricular myocardium of the heart after a local thermal injury in adult hens and newborn chickens was undertaken by methods of light and electronic microscopy. Myocardium of birds is a comfortable model for experimental researches, because methods of operation on an open heart is easily survived by birds and allow to standardize experimental technique and to be sure of the correctness of the experiment with your own eyes. An operation was conducted under ethereal anesthesia and with the help of a thermocautery, the wall of the left atrium of the heart was cauterized. The areas of damage and the zone near the damage were researched using light and electronic microscopy. Material for light and electronic microscopy was taken on the 1-30, 60, 180, 360 days after the trauma; it was fixed and processed by standard histological methods. On the 1-3 days after the thermal damage of the wall of the left atrium of the heart of adult hens, the areas of necrosis are delimited by a leukocytic billow. In twenty-four hours, resorption of necrotizing tissue already begins. In this period in parallel with the processes of resorption, mitotic activity of fibroblasts is shown in the zone near the damage (figures of all phases of mitosis are found). On the 3rd day after the trauma, in the site of damage granulation of connective tissue is presented by mature actively synthesizing fibroblasts. Fibroblasts have a basophilic cytoplasm, large nuclei with large nuclei, abundance of ribosomes and polysomes, great number of mitochondria. In the granulation of connective tissues of the damage on the 3rd -7th day there are isolated areas of muscular tissue, consisting of 3-4 cardiomyocytes. Dystrophic processes proceed in one сell; in other cells can be seen compensatory adaptation changes (increase of nucleus and nucleolus, numerous ribosomes, polysomes, which are in the zone of synthesized myofilaments). On the 7th day with the appearance of thin collagen fibers, the number of isolated cardiomyocytes diminishes, and by the 15th day, they disappear completely. The epicardium near the zone of damage is thickened, and in 20 days completely covers the area of damage. After 30-60 and 180-360 days of a damage there is the further ripening and compression of connective tissue scar. In the central part of a scar collagen fibers are situated disorderly, and on the periphery collagen fibers lie parallel to each other. In the border zone near damage the regenerative processes in cardiomyocytes were only at endocellular level, and mitotic activity of cardiomyocytes in this zone is absent. Formation of myofibrils de novo, like their new formation at the normal histogenesis of cardiac or somatic muscular tissues does not take place. Thus, renewal of the integrity of the atrial wall of the heart of experimental adult hens takes place due to formation of connective scar tissue.

In the first three days after thermocoagulation of the atrium walls in newborn chickens, the delimitation of necrotic tissues by leukocyte shaft and their resorption by macrophages occur in the damaged zone. Already by the 10th day after the injury, small areas of necrotic tissue remain in the damaged zone thanks to the active participation of macrophages. Many cardiomyocytes in perinecrotic zone are in a state of degeneration, necrobiosis or necrosis, causing not only by trauma effects, but also developing hemodynamic disorders. In parallel with the processes of resorption, the mitotic activity was of fibroblasts in perinecrotic zone, as evidenced by numerous figures of mitosis in them. The formation of connective tissue at the damage zone in the studied newborn chickens takes place very quickly, already in 10 days after the operation, the zone of damage was completely replaced by granulation of connective tissue. However, in newborn chickens, compared to older birds, there is continued growth of the heart as an organ and its myocardium leads to growth in emerging scar border of the muscle fibers. In the later stages (30, 60, 180 and 360 days) these muscle fibers atrophy because of compression of dense connective scar tissue.