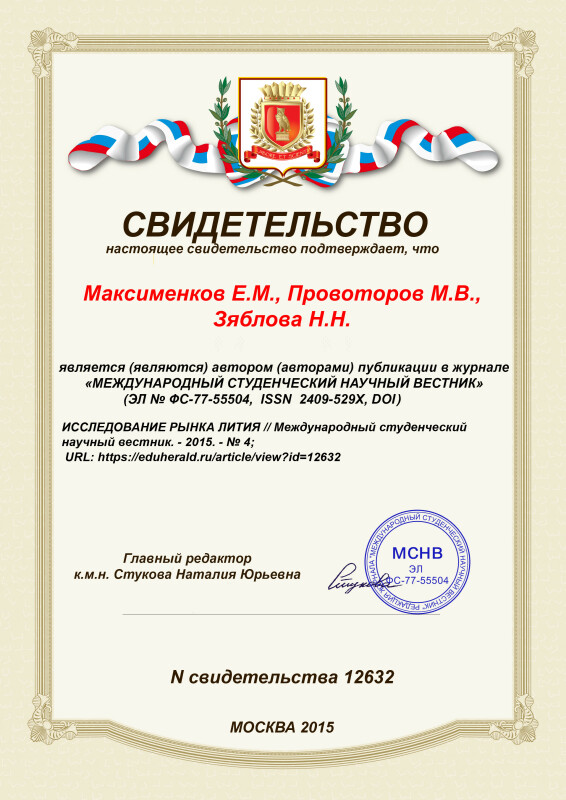 Lithium is a chemical element with symbol Li and atomic number 3. It is a soft, silver-white metal. Lithium is the lightest metal and has a number of unique properties.

The lithium metal and its compounds are widely used in various areas of production of the advanced countries of the world. Traditional scope of lithium products – is getting electrolysis of aluminum, glass and ceramics. Also, lithium and its compounds are applied in the production of lubricants, synthetic rubber, electric batteries and in some advanced technical fields. Among the most promising applications of lithium are the most important production of aluminum-lithium alloys, chemical power sources (hits) and tritium fertile materials [1,2].

The lithium content in the upper continental crust is 21 g / t in sea water of 0.17 mg / l. The main minerals of lithium – lepidolite – KLi1,5Al1,5 [Si3AlO10] (F, OH) 2 and pyroxene spodumene – LiAl [Si2O6]. When lithium does not form independent minerals, it is isomorphic to replace potassium in common rock-forming minerals

2. Lithium mine production and reserves in tonnes.

Chile and Argentina produced the largest portion of the world’s lithium salt lakes approximately 46 % of the total production of lithium (company FMC, Rockwood and SQM) . Company Talison Lithium delivers ~ 34 % of the global lithium and about 65% of the lithium mineral spodumene. With regard to global demand, the reserves of lithium are presented in abundance, and the existing manufacturers are expected to plan to expand production to meet growing needs.

Developers are looking for more variety of electric vehicles and specialized sources of lithium carbonate. Lithium batteries require very high purity lithium carbonate (over 99.5%) which should have very consistent quality and a certain level of impurities.

Given an annual market growth of 7-12% between 2016 and 2020 lithium market is expected to experience a shortage of production capacity, and may require additional new production sources.

Lithium is used in a large number of industries because of its unique high electrochemical potential, low coefficient of thermal expansion and catalytic properties.

World consumption of lithium increased from 12,800 tons in 2000 to 22,600 tons in 2008, which is 6% in average per year-0. Demand decreased by approximately 13% in 2009, due to the global economic crisis, but fully recovered in 2010, to about 24,500 tons. Glass and ceramic industry – the largest consumers of lithium, about 31% of total consumption, followed by batteries – 23 % (as compared to 6% in 2000). Major automakers are predicting that the sector of hybrid and full electric vehicles will grow steadily and reach a market share of cars in the 10-30% by 2020. As a result, the demand for lithium will grow 100-200% over the same period of time. In addition to the steady growth in the sector of batteries and electric vehicles, all other applications of lithium are expected to also be expanded according to the economic growth in the world as a whole.

Electrification of the vehicle is the greatest opportunity for growth in demand for lithium. Hybrid and full electric vehicles obtain share in the market each year. Developing countries have the opportunity to start producing electric vehicles more quickly, given the large number of first-time buyers (lacking in vehicles), and they have recently started to develop the network infrastructure and the government started focusing on the growing problem of environmental pollution.

Lithium consumption continues to grow despite the global economic crisis, the debt crisis in the Eurozone and a slowdown in China. Rechargeable lithium batteries continue to maintain this growth at a high level, helped by an increase in the production of portable consumer electronics as well as increase the capacity of batteries. The unique properties of lithium are also supported by the growth in other markets that have experienced decline, including the production of fat, glass, and metal powders. Consumption of lithium already surpassed 2008 levels and amounted to 26,500 tons in 2012. Demand for lithium will grow at around 8% per year for the base case scenario, the market of electric vehicles is becoming more and more important for growth as we approach the year 2017.

Set of lithium products meet a variety of end-use, in which lithium is consumed, complicating the global balance of supply / demand and evaluation. The price of the main lithium products consumed by the market, such as carbonate and hydroxide, broader factors affect the global market and supply / demand, other products in tandem with these starting materials and some completely independent of them, such as lithium metal and organolithium. Prices for lithium carbonate increased in 2010 but remain below 2007 highs. The prospect of new supply entering the market companies, acts as a barrier to raise prices, despite the growing demand.