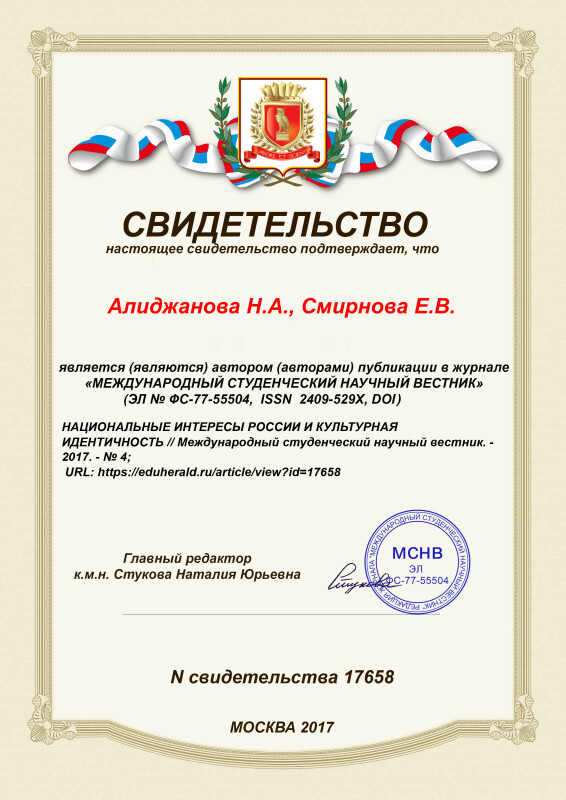 Article in PDF
0 KB
For the last several decades the global world has drastically changed. New states creation, local conflicts, economic crises, technological breakthrough, speed up the economic diversification process and scientific acceleration has put a new emphasis on the problem of national identity and protection of the preservation of national interests. One of the main tasks of our state, along with the implementation of national projects, is the necessity in the given article the authors note that organizing pattern interaction considering inward-looking policy and foreign policy, the researchers often put national interests as well as the processes and mechanisms of their formation and accomplishment into the center of their analysis National environment is a unique universe where human is connected with historically based nature.
international relations
norms of universal application
ideological concepts
national interests
intercultural interaction

«I cannot forecast to you the action of Russia. It is a riddle wrapped in a mystery inside an enigma; but perhaps there is a key. That key is Russian national interest».

Ideologies and concepts are the main driving forces behind the foreign policy of any state. However, if we focus only on the analysis of the strategic guidelines formation and the activities of the states in the international arena only to identify their ideological origins, it will mean a significant narrowing of the subject study. Moreover, it remains an open question about the nature and the origin of ideologies. And therefore, organizing pattern interaction considering inward-looking policy and foreign policy, the researchers often put national interests, the processes and mechanisms of their formation and accomplishment into the center of their analysis. This ideological concepts and beliefs have often been considered as the expression of certain interests. Those interests, called national, have always been given considerable prominence. The field of international relations dates from the time of the Greek historian Thucydides. International relations is the field studies relationships between political entities such as states and the wider world-systems produced by this interaction [1]. The category «national interest» is the сentre of the modern theory of international relations. Inherently such interpretation point the way to the systematic research of the foreign policy process.

Government activities in the international field get logics if we see it as a more or less phasing and coordinated chain of actions in multiple directions and in various geographical areas during the steps to actualize the national interests. However, this immediately poses the key question: What is the national interest? What is the subject matter of it? How does it correspond with the interests of the different social stratums, political groups, lobbing organizations, dealing with one or another sector of economic activity? The researchers have repeatedly noted that each social group or stratum is to interpret their own interests as «national» or even «panhuman». In the scientific and opinion journalistic literature there are two main interpretations of the concept «national interest» representing the polar points of view but there are numerous concepts that combine to varying degrees the elements of both approaches [2].

Relations between nations are resolved in a system where we have United Nations Organization and its subsidiaries as a pseudo-legislative body. Also there is international tribunal court in the Hague as a pseudo-judiciary body. Most of the legislative acts in the modern world including the membership in United Nations Organization are voluntary and global legal decisions have non-binding resolutions. It’s essential to stress that actually there is no executive body in the world system of foreign affairs and the states deliver this function according to their own ambitions. Mutual agreements usually are limited by the certain period of time. It is necessary to note that major subjects of the relations in the world are sovereign states. In respect to the law, as well as in the international relations, state institution is the most accepted official way to interact between nations. State has been considered to be the only way to organize societies. So as some foreign politicians guess that it is efficient to import the value from detailed analysis and state policy development. This strategy has been conducted on a very common level and is usually short term oriented. As a rule, state policies often change with the coming elections. Also in the modern world the issues of culture overcome the influence of state.

Cultural identity is the awareness of its own cultural peculiarities, its evaluation in history in comparison with other cultures, understanding of its distinctiveness and integrity in the context of globalization and the spread of mass culture unifying in the post-traditional world. Any world culture can not be understood clearly without a reference to a certain kind of society. If we consider culture as a result of some actions produced by the human beings, it also reflects on the society functions. In other words it is parallel the established technology, which could be classified. So the “cultural code” acting as a formula may logically fit the technological aspect of the issue. However, the society is presented as not just an accumulation of people in most social studies, but as a strong system, where individuals are united by certain relationships. The term «cultural code» describes a self-actualized human mentality is a unity of value orientations as well as fundamental features of characteristics specific to some nation» [3; 4; 5].

For the last several decades the global world has drastically changed. New states creation, local conflicts, economic crises, technological breakthrough, speed up the economic diversification process and scientific acceleration has put a new emphasis on the problem of national identity and protection of the national interests. One of the main tasks of our state, along with the implementation of national projects is «the necessity of creating programs of cultural continuity, which emphasize the importance of cultural authenticity and cultural heritage to reconstruct a single spiritual universe of the nation» [6, р.288]. A lot of Russian and foreign scientists have noted the necessity to develop intercultural communication between the countries. Many scientific papers (S.G. Ter-Minasova, G.V. Elizarova, N.D. Holschova, V.P. Furmanova) are devoted to the necessity to form and development students’ personality, as a cultural-historical subject who recognizes the equality and value of all the cultures, manifesting the willingness and ability to intercultural interaction [7;8;9]. Among the scientific publications related to the teaching of foreign language taking into account cultural orientation, one should mention the works of V.V. Oshepkova, O.G. Oberemko, P.V. Sysoyev. The essence of culture and its characteristics have been considered in the works of modern scientists such as E.V., Davidovich, G.V. Drach, V.E. Zharov, E.V. Zolotukhina, V.P. Makarenko, S.M. Petkova, E.G. Shevlyakov, M.M. Akhmedova, N.V. Tabunova, S.N. Artemovsky and many other researchers. Cultural heritage as a collective identity has been studied by the Russian scientists Y.E. Arnautovic, A. by V. Boganova, D.S. Likhachev, by S. Averintsev, D.E. Muse, V.M. Mazaev. Emphasizing the special significance of culture in spiritual life of the society, V.P. Zinchenko notes that «art acts as an extension of life itself and as a means of forming cultural identity. The influence of true art is deeply individual» [10, p.13]. The analysis of the available publications relating to a research subject leads us to a conclusion that domestic and foreign historiography, the socio-political literature and works of scientists concerning the problems of national interests’ formation don’t have an integral, system idea about realization of a complex of Russian national interests in the formed frame of the international relations.

Within different nations the social organization concerning technological level of development may be the same, but apparent differences may be seen in customs and traditions, art and free time preferences etc. National environment is a unique universe, where human is connected with historically based nature. It affects social mentality of an ethnic group, forming national character and determining the directions of different life activities. International tourism contributes to the increase of the interaction of the cross-cultural contacts among the representatives of different countries and as a result to the dialogue between peoples and cultures.

Considering an internal factor of national interests` development, we will notice that it includes difficult mechanism of taking into account the interests of the individual and various social groups, their coordination and transfer of these interests to the level of the state as subject of international policy. The concept of national interests in the developed democratic countries assumes the tradition of their discussion on state`s level and the involvement in this process the most active social groups of the society. Unfortunately, in the Russian Federation this mechanism is practically absent due to the insufficient level of creating relationships with civil society. To cope with this negative situation active consolidation of the top leadership with various branches and institutes of the power, the expert community and the main institutes of civil society that will allow to develop real national interests and to start their effective implementation, even at negative active impact of an external factor.

Two philosophical directions (of the end of the 19th-beginning of the 20th centuries – «Slavophilism» and «Westernism») had a serious influence in forming and developing the national and state interests of Russia. N.L. Danilevsky, I.V. Kireevsky, V.I. Lamansky, K.N. Leontyev can be referred to the representatives of the first direction considering a question of a special mission of the Russian people capable to build the country`s future taking into account public and national interests and values. «Westerner» including P.L. Chaadayev, T.N. Granovsky, M.A. Bakunin, V.P. Botkin, K.D. Kavelin, M.N. Katkov though advocated the national interests of Russia, considered that the Russian people have to adopt a lot of things at the West and pass its way.

Despite the changes in the international field at the end of the 20th century which have negatively influenced on formation and implementation of Russia`s national interests our country can only count on carrying out an active foreign policy in world politics in connection with its considerable geopolitical potential so far. This course needs to be aimed at harmonization of the relations with the leading world and regional powers and also with perspective economic players that, eventually, has to promote and protect the Russian interests on the international scene. Dmitry A. Medvedev [11] has pointed out that «modern world is going through fundamental and dynamic changes that profoundly affect the interests of the Russian Federation and its citizens». A new Russia, basing on a solid foundation of its national interests, has now acquired a full-fledged role in global affairs. In the concept of education development of the Russian Federation until 2020 among the most important tasks are the formations of students’ civil responsibility and legal consciousness, spirituality, personal culture. Spiritual and cultural heritage are the most significant components of the national wealth of our country, which distinguishes us from other world powers. Understanding issues of cultural and historical heritage and its continuity should become the spiritual basis for strengthening the unity of our nation.