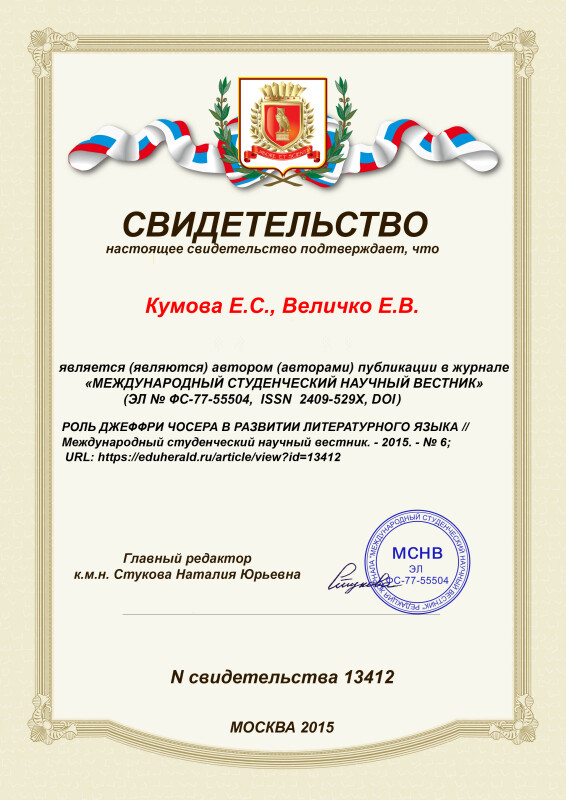 THE ROLE OF GEOFFREY CHAUCER IN THE DEVELOPMENT OF LITERARY LANGUAGE

Article in PDF
172 KB
Geoffrey Chaucer, English poet, "the father of English poetry." Geoffrey was one of the first poets, who began to write his works in English, pulling away from the usual Latin. All of his work was transformed into a whole new trend, called the English literary Renaissance. The author has a unique style of poetry, created by him to write many of his works. A comprehensive study of the person of Geoffrey Chaucer and his influence on the development of the literary language is carried out in the analysis, based on the biography of Jeffrey and study of his works have come down to our time.
literary language
English poetry
Geoffrey Chaucer
Данная статья посвящена комплексному исследованию личности Джеффри Чосера и его влияния на развитие литературного языка. Анализ производится при помощи рассмотрения биографии, изучении работ, дошедших до нашего времени, а так же поиска ответа на вопрос: «Почему Джеффри Чосера называют «отцом английской поэзии»»? Именно изучению вклада поэта в развитие литературного языка посвящена данная работа.

The matter of this paper is analysis of the role of such an important person of Middle English Period as Geoffrey Chaucer in the development of literary language. The general aim is to demonstrate magnitude of Geoffrey Chaucer and to sift his influence on the English language.

In this paper, I attempt to clarify the relation between Geoffrey Chaucer and the Middle English literary period. To do so, I first present some biographical facts then attempt to show that the Chaucer's language is a really great innovation for the language because of Geoffrey Chaucer was one of the first people who began to write not in Latin, but in their mother tongue-English. So, that's why many scholars usually name Chaucer as "the Father of English literature". In conclusion, there is an inference from the facts that are analyzed in the article.

It's important to begin with a Geoffrey Chaucer biography because it can help us to understand this person and to know some facts about his contribution to the English language.

Geoffrey Chaucer was born in London circa 1340. Chaucer's family was of the bourgeois class. According to some sources, Chaucer's father, John, carried on the family wine business.

Geoffrey Chaucer is believed to have attended the St. Paul's Cathedral School, where he probably first became acquainted with the influential writing of Virgil and Ovid.

In 1357, Chaucer became a public servant to Countess Elizabeth of Ulster, the Duke of Clarence's wife, for which he was paid a small stipend-enough to pay for his food and clothing. In 1359, the teenage Chaucer went off to fight in the Hundred Years' War in France, and at Rethel he was captured for ransom. Thanks to Chaucer's royal connections, King Edward III helped to pay his ransom. After Chaucer's release, he joined the Royal Service, traveling throughout France, Spain and Italy on diplomatic missions throughout the early to mid-1360s. For his services, King Edward granted Chaucer a pension of 20 marks.

In 1366, Chaucer married Philippa Roet, the daughter of Sir Payne Roet, and the marriage conveniently helped further Chaucer's career in the English court.

By 1368, King Edward III had made Chaucer one of his esquires. From 1370 to 1373, he went abroad again and fulfilled diplomatic missions in Florence and Genoa, helping establish an English port in Genoa. He also spent time familiarizing himself with the work of Italian poets Dante and Petrarch along the way. By the time he returned, he and Philippa were prospering, and he was rewarded for his diplomatic activities with an appointment as Comptroller of Customs, a lucrative position. Meanwhile, Philippa and Chaucer were also granted generous pensions by the Duke of Gaunt.

In 1377 and 1388, Chaucer engaged in yet more diplomatic missions, with the objectives of finding a French wife for Richard II and securing military aid in Italy. Busy with his duties, Chaucer had little time to devote to writing poetry, his true passion. In 1385 he petitioned for temporary leave. For the next four years he lived in Kent but worked as a justice of the peace and later a Parliament member, rather than focusing on his writing.

When Philippa passed away in 1387, Chaucer stopped sharing in her royal annuities and suffered financial hardship. He needed to keep working in public service to earn a living and pay off his growing accumulation of debt.

The precise dates of many of Chaucer's written works are difficult to pin down with certainty, but one thing is clear: his major works have retained their relevancy even in the college classroom of today.

Chaucer's body of best-known works includes the Parliament of Fouls, otherwise known as the Parlement of Foules, in Middle English spelling. Some historians of Chaucer's work assert that it was written in 1380. Critic J.A.W. Bennet interpreted the Parliament of Fouls as a study of Christian love. The poem uses allegory, and incorporates elements of irony and satire as it points to the inauthentic quality of courtly love. Chaucer was well acquainted with the theme firsthand-during his service to the court and his marriage of convenience to a woman whose social standing served to elevate his own.

Rime royal involves rhyming stanzas consisting of seven lines apiece, usually with an iambic pentameter rhyme scheme. The rhyme royal stanza consists of seven lines, usually in iambic pentameter. The rhyme scheme is a-b-a-b-b-c-c. In practice, the stanza can be constructed either as a tercet and two couplets (a-b-a, b-b, c-c) or a quatrain and a tercet (a-b-a-b, b-c-c). This allows for variety, especially when the form is used for longer narrative poems. Along with the couplet, it was the standard narrative metre in late Middle Ages.

Troilus and Criseyde is broadly considered one of Chaucer's greatest works, and has a reputation for being more complete and self-contained than most of Chaucer's writing, his famed The Canterbury Tales being no exception.

Chaucer is most famous now for The Canterbury Tales, his big work that he gained the most recognition for, at least nowadays. We refer to them as tales or stories, but they are actually in verse; they're all poems.  Chaucer presents a series of these 'tales' told by a bunch of pilgrims who headed to Canterbury Cathedral, which was a big pilgrimage site in England at the time. All the pilgrims had different personalities and different jobs, and some of their stories can get pretty raunchy - which is a reason to read it, but we'll get into that a little bit later. The reason why Chaucer can tell these stories, as we mentioned before, is the fact that he did so many different things and got really familiar with all sorts of people, so he could write about all these different types of personalities.

The Canterbury Tales are probably unfinished and are organized into a bunch of fragments. The text itself is lost, so it's been reconstructed from a bunch of different manuscripts. Chaucer was working on them relatively late in his career; they were definitely some of the last things he did.

A Treatise on the Astrolabe is one of Chaucer's nonfiction works. It is an essay about the astrolabe, a tool used by astronomers and explorers to locate the positions of the sun, the moon and the planets. Chaucer planned to write the essay in five parts but ultimately completed only the first two. Today it is one of the oldest survived works that explain how to use a complex scientific tool.

The poetry of Chaucer, along with other writers of the era, is credited with the aim to standardize the London Dialect of the Middle English language from a combination of Kentish and Midlands dialects. This is probably overstated; the influence of the court, chancery and bureaucracy-which Chaucer was a part of -remains a more probable influence on the development of Standard English. Modern English is somewhat distanced from the language of Chaucer's poems owing to the effect of the Great Vowel Shift some time after his death. This change in pronunciation of English still not fully understood, makes the reading Chaucer difficult for modern audience. The status of the final -e in Chaucer's verse is uncertain: it seems likely that during the period of Chaucer's writing the final -e was dropping out of colloquial English and that its use was somewhat irregular. Chaucer's versification suggests that the final -e is sometimes to be vocalized, and sometimes to be silent; however, this remains a point on which there is disagreement. When it is vocalized, most scholars pronounce it as a schwa. Apart from the irregular spelling, much of the vocabulary is recognizable to modern reader.

Chaucer is also recorded in Oxford English Dictionary as the first author to use many common English words in his writings. These words were probably frequently used in the language at the time but Chaucer, with his ear for common speech, is the earliest manuscript source. Acceptable, alkali, altercation, amble, angrily, annex, annoyance, approaching, arbitration, armless, army, arrogant, arsenic, arc, artillery and aspect are just some of the many English words first attested in Chaucer.

The legendary 14th century English poet Geoffrey Chaucer died October 25, 1400 in London, England. He died of unknown causes and was only 60 years old. Chaucer was buried in Westminster Abbey. His gravestone became the center of what was to be called Poet's Corner, a spot where such famous British writers as Robert Browning and Charles Dickens were later honored and interred.

Summing up the results of the conducted analysis the following conclusions can be made: we can constantly say that Geoffrey Chaucer made a great contribution to the English literature.

I want to end this paper by stressing Chaucer's contribution to the English literary:

He was one of the first poets who consistently broke out the medieval alliterative tradition and wrote in accentual-syllabic metre.

The obtained results can prove the fact that Geoffrey Chaucer is known for metrical innovation, inventing the rhyme royal, and he was one of the first English poets to use the five-stress line, a decasyllabic cousin to the iambic pentameter, in his work, which can understand us why he is known as "The Father of English literature".